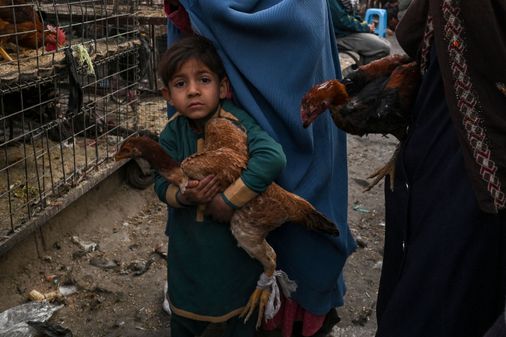 But for the 38 million Afghans left in the country, their 40-year trauma of conflict and poverty – not to mention new threats from COVID-19 and climate change – has entered a new and more desperate phase. Their new normal is characterized by four factors.

There is norm-setting of the new regime. Many are afraid of the consequences. The International Rescue Committee has been working in the country for over three decades and has 1,700 Afghan staff providing humanitarian services, including training. We are committed to continuing our work in nine provinces, including the employment of women and the education of girls, and we are currently allowed to do so.

There are factional fighting within the new Taliban regime and clashes across the country with shocking reports of persecution of former human rights defenders. And then there is economic meltdown. It is this last factor that triggers an alarming crisis with the leader of World Food Program that tells the BBC that 9 million people in Afghanistan are marching against famine. Last year, 1 in 5 was threatened by food insecurity, but this year the figure is more than 1 in 2 (around 23 million people in total). The IRC expects the number of people in distress in Afghanistan to increase by 50 percent this year alone.

Afghanistan has been subjected to an unprecedented economic shock for the past three months. The end of the war has meant the end of employment for millions of Afghan entrepreneurs engaged in the war economy. The suspension of foreign development aid to the state treasury – worth 75 per cent of the public budget – has weakened the government’s ability to pay salaries to civil servants and provide desperately needed services to millions of Afghans. The impact on ordinary Afghans has been immediate and widespread – particularly in the health sector, where 90 per cent of primary health facilities are at risk of being closed, potentially ending supplies in 31 of Afghanistan’s 34 provinces.

Meanwhile, the freezing of Afghanistan’s financial assets and the suspension of its support from the International Monetary Fund have brought the country’s ability to pay for basic goods – medicine, fuel, food – to a standstill. And continued uncertainty about sanctions regimes, despite a welcome U.S. denial of humanitarian efforts, has frozen trade and created risk for aid organizations.

The result is catastrophic. Afghans do not have money. The banking system does not work. Inflation is fierce after a devaluation of 14 percent of Afghanistan since mid-August, while the price of basic cooking goods, such as flour and cooking oil, has risen by 35 percent in recent weeks. According to the International Monetary Fund, Afghanistan’s GDP could shrink by up to 30 percent under Taliban rule, a warning of a new refugee crisis.

Increases in humanitarian aid to feed people and keep them warm are crucial, but not sufficient. Without a functioning economy and functioning banking system, life and livelihoods are in danger; Humanitarian suffering is on the rise, as is migration. Norwegian Refugee Council reports that 300,000 people have fled into Iran since August.

A true plan to alleviate the suffering in the country must be financially not just humanitarian. It means facing some hard truths.

The public sector needs to be relocated with a massive expansion of international aid mechanisms (such as the UN or the World Bank) to directly pay salaries to teachers and nurses. Citizens must be able to buy food, fuel and medicine; markets must be restarted with a stable currency; the banking system must be revived. Sanctions regimes, including UN Security Council sanctions, must have clear and clearly communicated exceptions for humanitarian organizations and the commercial activities and actors (suppliers, banks, etc.) on which they depend.

A recent report from a meeting of the Center for Global Development made the necessary, albeit unpleasant, point that support from Western countries will be needed. As the report points out, it is in the power of the US government to free up national financial assets for specific purposes, as has been done with Venezuela, to help combat the spread of COVID-19.

It is not about supporting the regime. It is about saving the people and the country from further disasters. As the Center for Global Development put it: “Binding the use of funds for the purchase of essential imports – especially food, fuel and health products – and / or facilitating dollar auctions to support the value of Afghanistan could help meet the needs of ordinary people. Afghans facing food insecurity without giving the Taliban discretionary control. “

There will certainly be accusations that such measures will help the regime. There is an obvious moral counterplay by letting people starve in an attempt to deny political credit to a regime. But there is also a political. Who can believe that America and its allies will not be blamed for the catastrophe that is unfolding when its political decisions are clearly so central, and who can honestly believe that a successor regime would be better? The answers are obvious.

The war in Afghanistan is over, but peace involves dangers. They need to be addressed. The sunken cost of the longest war is good reason for action, not passivity. And by virtue of its recent history in the country, only the United States can enable the financial flows to help the Afghan people.

David Miliband is the President and CEO of the International Rescue Committee and former Foreign Secretary of the United Kingdom.