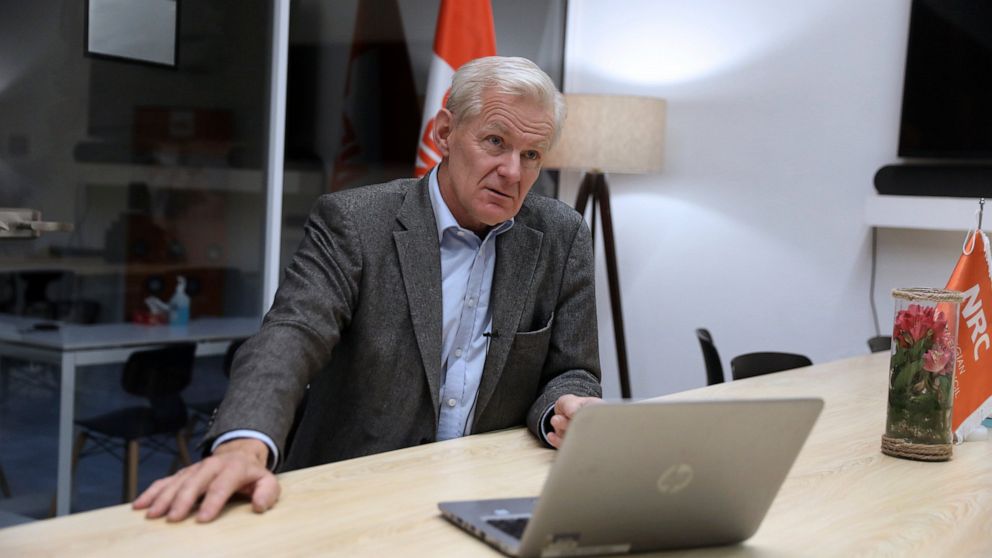 TEHRAN, Iran – Thousands of Afghan refugees are fleeing the Taliban to neighboring Iran every day, and the trend could eventually become a crisis for Europe, a top aid official said on Wednesday.

Jan Egeland, Secretary General of the Norwegian Refugee Council, this week visited refugees around the province of Kerman in eastern Iran close to the border with Afghanistan. He warned that Europe could be affected if the influx into Iran continues.

Speaking to The Associated Press in the capital Tehran at the end of his trip, Egeland said more needs to be done to provide hope, food and care to Afghans fleeing the Taliban.

“Many Afghan refugees called their relatives and told them they were on their way to Iran, and many want to move on to Europe, so Europe should be less occupied with a few thousand (refugees) sitting on the Polish-Belarusian border. “

“More people came to Iran today than there are now at the border,” he added.

More than 120,000 Americans, Afghans and others were flown out of Afghanistan during a massive airlift operation in the days after Kabul’s capital fell to the Taliban on August 15. But thousands more were left behind, with many fleeing to the borders and seeking help from aid organizations.

It is estimated that 300,000 have fled Afghanistan to Iran since the Taliban took power, according to the NRC.

“There is no economy, there is very little help, and there is too little shelter and food for millions and millions in need,” Egeland said.

He said that as the Afghan winter comes and there is not enough shelter for refugees in Afghanistan, more refugees will enter Iran.

“We expect this to become even more acute as hundreds of thousands reach the border between Afghanistan and Iran. The winter will be terrible in Afghanistan, “he said.

The Secretary-General called on rich countries to immediately scale up their aid contributions, both in Afghanistan and in neighboring countries like Iran, before the deadly winter cold.

According to the NRC, between 4,000 and 5,000 Afghans flee Iran every day through informal border crossings. It said Iran has supported these Afghans, in addition to hundreds of thousands of others who have been sheltering the country for much longer – some for decades.

During his trip to Kerman province, Egeland met with some of the refugees and he said that the 3.5 million Afghan migrants already in Iran are fighting as a result of US sanctions against Iran.

Iran’s interior minister, Ahmad Vahidi, said on Tuesday that Iran has thousands of people at the border with Afghanistan every day. He also warned that a new wave of Afghan refugees could try to go to Europe if no help is provided.

The influx of millions of Afghan refugees into Iran began in 1979, when forces from the former Soviet Union occupied Afghanistan. The occupation ended in 1989, leaving room for many years of civil war and ultimately a Taliban-controlled government. Then came the terrorist attacks of September 11, 2001 on New York and Washington, and the subsequent US-led invasion targeting al-Qaeda leader Osama bin Laden, who was housed by the Taliban.

Iran and Afghanistan have three border crossings along a common border of about 945 kilometers (580 miles) long. Iran reportedly hosts about 800,000 registered Afghan refugees and more than 3 million undocumented Afghans.

In the years since the United States withdrew from the 2015 nuclear deal between Iran and the world powers and reintroduced sanctions that sent the country’s economy into free fall, however, some Afghans in Iran have left the country.

Egeland praised Iran for hosting millions of Afghans over the past four decades and said the international community should now step up and show support. “How can you expect Iran to take on this responsibility on its own?” he said.

“What Europe should do is invest in hope, opportunities, opportunities inside Afghanistan and in neighboring countries if they want to prevent people from migrating towards Europe.”