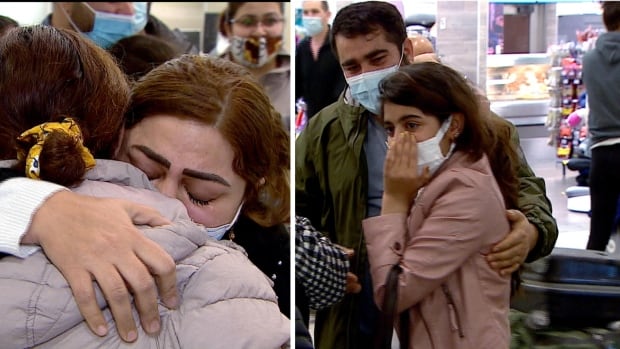 As he waited for the arrival level at Calgary International Airport, Bahray Zaheri could hardly wait to hug his wife and daughter.

It took 11 years to bring them to Canada from Afghanistan.

“Seventeen minutes,” he said, scanning the arrival board.

As Zaheri waited at the airport late Thursday night, his phone rang and beeped constantly, while anxious friends and family members in Canada and Afghanistan rang and texted to get updates.

“I have been waiting 11 years for this day, for this moment,” he continued as the energy and anticipation inside the terminal grew.

Zaheri arrived in Canada from Afghanistan 11 years ago with a group of refugees, all family members, sponsored by his aunt.

He should have claimed his wife and daughter on his immigration forms, but Zaheri did not understand this until he applied to sponsor them and found out that his family did not qualify for sponsorship.

He and his lawyer continued to work to resolve the issue, which included completing two applications – both rejected – to get Zaheri’s family to join him on humanitarian and compassionate grounds.

In the early years, Zaheri was able to visit them a few times, but his last visit was in 2014.

’11 years in my opinion is unscrupulous’

Urgency increased in August as the Taliban took control of Afghanistan.

Peter Wong, Zaheri’s lawyer, told CBC News in August that regardless of the circumstances, the delay in processing this case was unreasonable.

“[The Taliban] believes that women’s rights practically do not exist … girls as young as 12 or 13 can be subjected to rape or forced marriage by the Taliban. That’s real fear, “Wong said.

“Taking 11 years in my opinion is unscrupulous. It lacks any degree of humanitarian concern.”

Three months after the day Wong gave that interview, Zaheri’s daughter, Aesha, now nearly 12, got off a plane and into her father’s arms.

“I’m just so excited to finally see my daughter and hug my daughter,” he said.

“In Canada, there are plenty of opportunities, especially for children. I’ve been waiting for my daughter to go to school here.”

The match is not over yet

Zaheri’s sister, Sayeda, said the mistake her brother made on her original application forms was unintentional, but she also pointed out that her family came from a country with a high degree of distrust of the government.

She can afford others hoping to get a fresh start in Canada.

“When dealing with the government, always be honest. For our mistakes, it cost our family 11 years.”

Aesha and her mother, Walwala, are here on visitor visas, which have a maximum stay in Canada of three years.

Zaheris will submit new applications in hopes of making their status in Canada more permanent.

It is a bridge that Zaheri and his family are relieved to cross together, from Canada, instead of from Taliban-controlled Afghanistan.