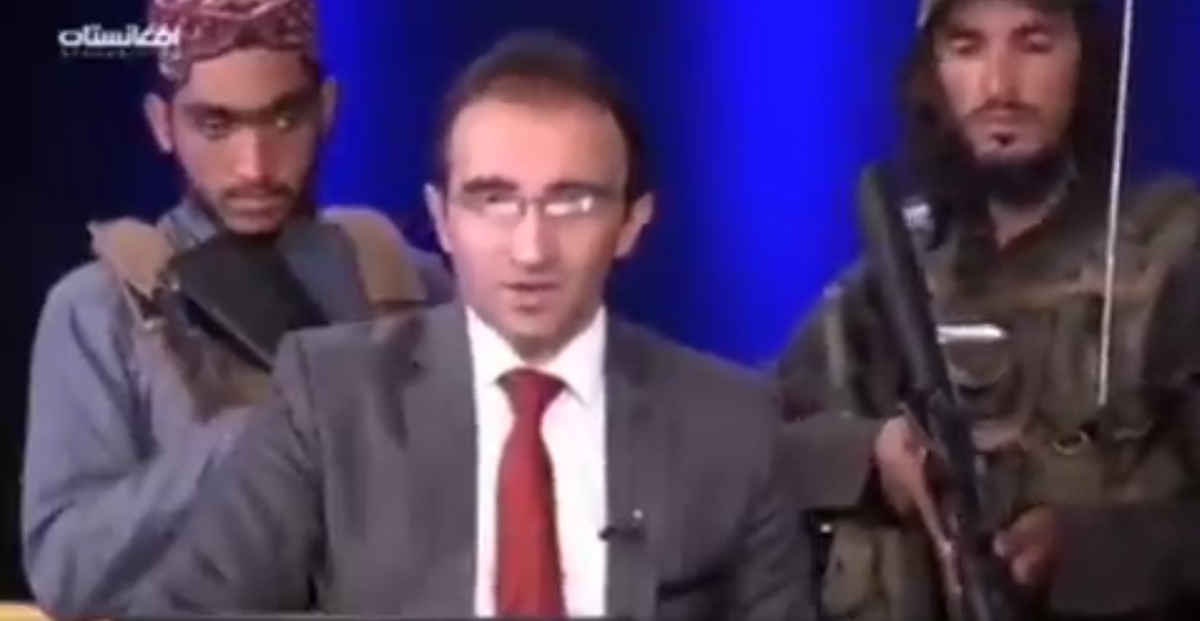 A video of an Afghan TV host dressed in a suit and tie continuing to host his talk show while surrounded by gunfire Taliban fighters has gone viral on social media.

The 42-second clip shows the host of Afghanistan TV, identified by Vice as Mirwaiz Haidari Haqdost, sitting next to a Taliban leader while reading out a statement from the hardline group.

According to the media, the men stormed the building on Sunday and demanded to speak to the presenter. The anchor spoke of the collapse of the Ashraf Ghani government in Afghanistan and urged local people to cooperate with the group and “do not be afraid”.

The irony of the gunmen appearing in front of a banner identifying the program as from the “Afghanistan Peace Study” was not lost on social media users who were quick to point out the serious state of press freedom and individual freedom under Taliban rule .

“Afghanistan TV – Surreal,” wrote BBC anchor Yalda Hakim. “This is what a political debate looks like now on Afghan television, Taliban infantry keeping an eye on the host. The presenter talks about the collapse of the Ghani government and says that the Islamic Emirate says that the Afghan people should not be afraid #Afghanistan”

“This is surreal,” wrote Iranian journalist Masih Alinejad. “Taliban militants pose behind this visibly petrified TV host with weapons and make him say that people from #Afghanistan should not be afraid of the Islamic Emirate. The Taliban itself is synonymous with fear in millions of people. This is just another proof. “

“With armed Taliban fighters standing behind him, the presenter of Afghan TV’s political debate program Peace Studio says the Islamic Emirate (the Taliban’s preferred name) wants the public to ‘cooperate with it and not be afraid,'” the BBC reporter tweeted. Kian Sharifi.

In another tweet, he wrote that the program is called Pardaz. “In this longer video, the presenter interviews a Taliban fighter who is likely to surpass the rest of the party in the studio.”

At its first press conference since taking power two decades after it was ousted by a US-led coalition, Taliban leaders made assurances to allow independent media to operate in the country.

“It is clear that the Taliban are already conducting an organized search for journalists, both in Kabul and in the provinces. We are running out of time!” the German public broadcaster was quoted as saying by AFP. It added that the Taliban raided the homes of at least three DW journalists.

CNN captured footage of a Taliban fighter threatening to whip his journalists while international correspondent Clarissa Ward directed a piece-to-camera in the streets of Kabul.

And in a separate incident on August 18, a Taliban fighter was accused of beating Ahmad Navid Kavosh, a reporter for the local television station Khurshid TV, while interviewing another Taliban fighter outside Hamid Karzai International Airport in Kabul .

The Committee to Protect Journalists has accused the Taliban of a continuous attack on media personnel and has called on the group to stop the attacks and demanded that they allow the press to operate freely.