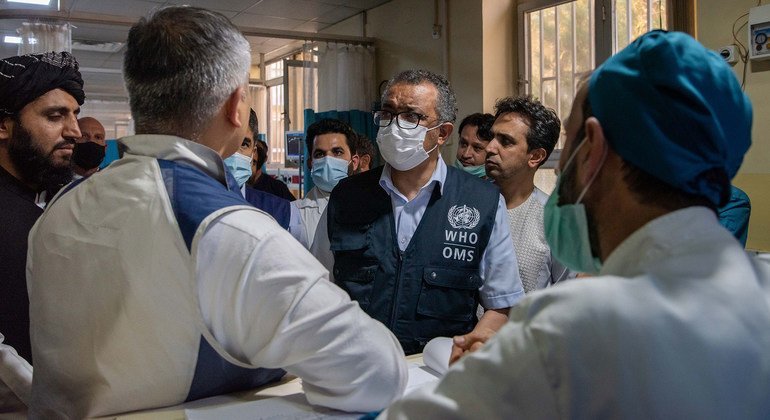 “Letting Afghanistan’s health care system fall apart would be catastrophic,” Mr Griffiths said. “People across the country would be denied access to primary health care such as emergency caesareans and trauma treatment.”

WHO Director-General Tedros Adhanom Ghebreyesus said in line with this message from the Afghan capital Kabul. international funding cuts had forced healthcare providers to decide “who to save and who to let die”.

Fewer than one in five of the country’s Sehetmandi facilities remained open, the WHO chief explained, even though he said access to all communities “was no longer hampered”.

“This collapse in health care has a ripple effect on the availability of basic and essential health care as well as on emergency preparedness, polio eradication and COVID-19 vaccination efforts“said Tedros, amid reports that the refrigerated chain’s medical storage has been compromised.

The WHO chief also noted that nine out of 37 COVID-19 hospitals have already been closed and that “all aspects” of the country’s COVID-19 response have dropped off, from surveillance to testing and vaccination.

We can not allow Afghanistan’s healthcare system to collapse.

I’ll release $ 45 million @UNCERF to keep health facilities in operation until the end of 2021.

Together with @WHO @UNICEF & NGOs, we stand by the Afghan people.

Amid concerns over women’s rights in the country following the appointment of an exclusive male Taliban interim cabinet earlier this month, Tedros insisted that women needed access to education, health care and health professionals.

“With fewer health facilities in operation and fewer female health workers reporting for work, female patients are hesitant to seek care,” he said. “We are committed to working with partners to invest in girls’ and women’s health education, as well as continue to train female health workers.”

Among its operations in Afghanistan, the WHO supports a comprehensive trauma program that includes training, supply of supplies and equipment to 130 hospitals and 67 blood banks.

WHO data showed that before the Taliban took power on August 15, 2.2 million people had been vaccinated against the new coronavirus in Afghanistan.

“In recent weeks, vaccination rates have dropped rapidly, while 1.8 million COVID-19 vaccine doses in the country remain unused,” Tedros said. “Rapid action is needed to use these doses in the coming weeks and work towards achieving the goal of vaccinating at least 20 percent of the population by the end of the year.”

Also the WHO top official called for renewed efforts to eradicate polio in Afghanistan – one of two countries where the disease remains endemic.

Measles is also spreading, warned the WHO’s director general, but he said access to all communities is now possible. “With only one case of wild poliovirus reported so far this year, compared to 56 in 2020, there has never been a better time to eradicate polio,” Tedros said. “However, the polio program will struggle to respond if the basic immunization infrastructure begins to collapse around it.”

This meant the WHO and partners could begin a nationwide house-to-house polio vaccination campaign that also combines measles and COVID vaccination, he explained.

95 percent of Afghan families are starving

Rising job losses, lack of cash and soaring prices are creating a new class of hungry people in Afghanistan, the United Nations World Food Program (WFP) warned on Wednesday, where city dwellers are suffering from food insecurity at the same rate as rural areas, for the first time.

Only five percent of households in Afghanistan have enough to eat each day, according to recent surveys conducted by the WFP, while half reported that they had run out of food at least once in the past two weeks.

“The economic free fall in Afghanistan has been abrupt and relentless, which has contributed to an already difficult situation as the country is struggling with another severe drought in three years. We are doing everything we can to support Afghan communities at this critical time. , ”Said Mary-Ellen McGroarty, WFP Country Director and Representative.

The middle class is also struggling, reports WFP, where only 10 percent of households run by someone with a secondary or college education are able to buy enough food for their families every day.

Although the situation is worse for the less well-educated, the unprecedented prevalence of hunger among families who had previously been spared signals the depth of the crisis facing Afghans.

On average, breadwinners only find work one day a week, barely enough to afford food that is rapidly rising in price. Cooking oil, for example, has almost doubled in price since 2020, and wheat has risen by 28 percent.

“WFP is taking up the urgent challenge, which is now twofold. Firstly, we continue to help the people who need it most to prevent acute hunger and malnutrition from destroying the country, and secondly, we are strengthening it. local capacity to produce food and bring it to market, while providing short-term job opportunities that help stabilize the economy and give families access to cash, ”added Ms. McGroarty.