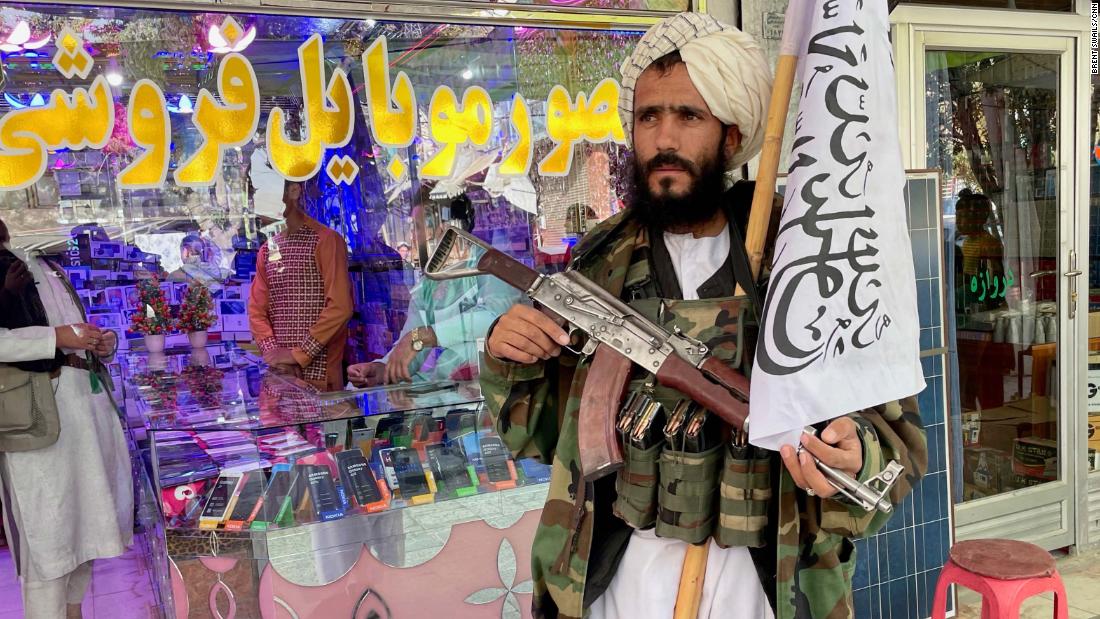 In the public spaces of the western Afghan city of Herat, crowds squinted into the sun and looked up at the lifeless figures. Adults took video and photos with their cell phones while young children climbed up to the edge of the fountain, directly under one of the bodies, to get a better view.

“People are really happy with this decision,” one of the bystanders, Mohammed Mansour, told CNN. “Because people believe that by doing this, kidnapping can be removed from this province.”

Under the previous government, corruption was widespread and crime was high. Since displacing the US-backed administration and storming into power in August, the Taliban have won the favor of many for issuing swift, albeit brutal, justice under the group’s strict interpretation of sharia law.

In another incident, just after the group had taken control of the city, two alleged criminals were paraded in front of a mocking crowd, their faces painted – a punishment that the Taliban favors petty thieves.

Just over a month after most of the international community fled Afghanistan on evacuation flights, the gruesome brutality in Herat goes back to the Taliban’s previous reign in the late 1990s, when grim public deterrents were common.

But the Taliban are also knowledgeable enough to know what the medieval exhibits look like to the rest of the world.

New booklet for the police

In Ghazni, a strategic city on the Kabul-to-Kandahar highway, the much-feared religious police are back on the streets, but instead of handing out punishment, they are on a charm offensive, more keen on shaking hands and presenting themselves.

On a recent patrol through the market, they gathered the shop owners around to encourage them to follow sharia law.

“Treat your women in accordance with Islamic law,” a commander told a crowd of shopkeepers, “and make sure they cover up.”

Nearby, a man accidentally smoked a cigarette, a felony under the previous regime, but this day the act was ignored by the police.

The Taliban has transformed Ghazni’s pink-walled Ministry of Women’s Construction into the new headquarters of the Ministry of Propagation and Virtue Prevention.

When a CNN team arrived, the men were still recovering and they carried a Taliban flag into the central office where director Mawlavi Abdullah Mohammad now sits. He said their role is to encourage Afghan people to embrace Islamic rule and that there are strict rules on how they can do so.

“We [act] in accordance with sharia law, “Mohammad said.” First, we inform people about good deeds. We preach to them and deliver the message to them in a nice way; the second time we repeat them again; the third time, we talk a little hard to them. “

He wears a blue booklet, recently published by the Taliban, which provides guidelines for the religious police on how to carry out their work.

“We comply with laws and regulations. We give advice, but to grab someone’s hand, to beat him, to send them a message or to send them a warning letter, is against the policy of the Emirates. If anyone has done this, it is an assertive act, said Mohammad.

When asked about a recent injunction in Helmand province that hairdressing shops could be punished for shaving men’s beards, he presented a document from the Taliban leadership condemning the decree.

But away from the public eye, not all Taliban fighters are following the new guidelines, and assaults are common.

In a safe place in Kabul, Wahid shows bruises across his back, still visible days after he was attacked. His name has been changed for his protection. He said he was stopped by a group of Taliban fighters at a busy roundabout to wear Western clothing.

“I was wearing pictures my cell phone related to homosexuals, “said Wahid. The fighters searched his phone, found the pictures and found out he was gay.

“When they hit me, they kept saying I was gay and that I should be killed.”

Wahid said they started beating him, first with a whip and then with a stick.

“They had covered my mouth and also told me not to make noise and if I did they would hit me even more so I had to bear the pain but not scream,” he said.

Life for gays has always been difficult and dangerous in Kabul, Wahid said, and beatings by Afghan police under the previous government were also common. But he said that now he is too scared to leave the house and worries that he will end up dying.

“I’m afraid now to dress like before, because they told me if they caught me wearing that kind of clothes again, or if I have a cell phone with pictures on it, they would kill me,” he said.

But justice cuts only one way here, and despite the Taliban’s carefully cultivated new image, Wahid believes the movement, born of conflict, is still brutal at its core.

“When they beat me, they kept saying I was gay and that I should be killed,” he said. “They had very scary faces. They enjoyed beating me.”