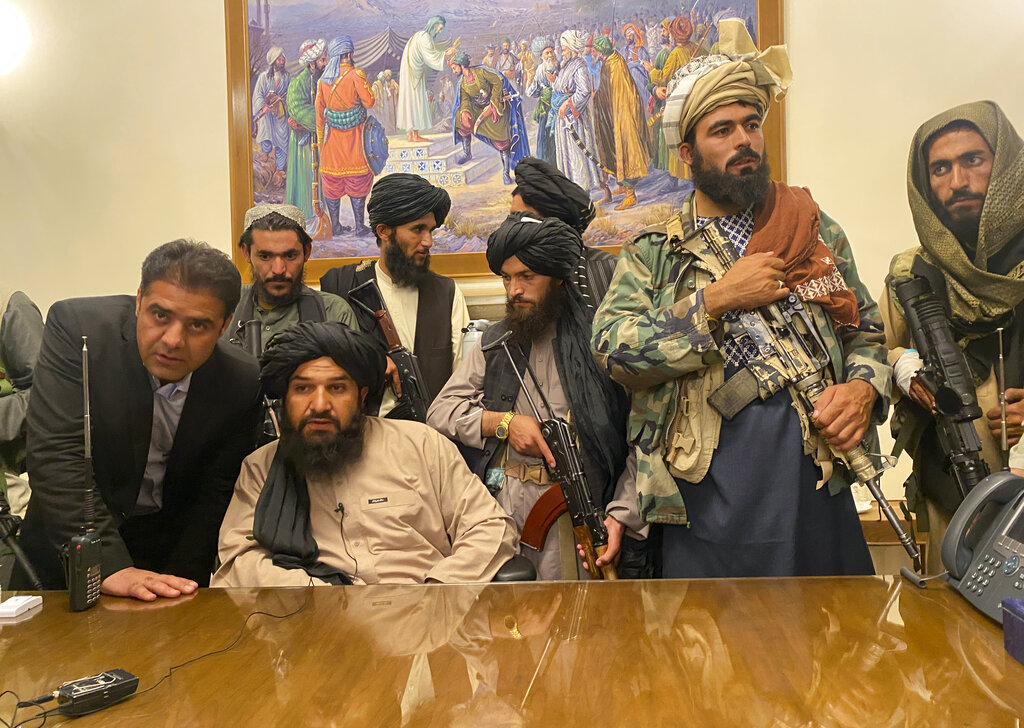 KABUL, Afghanistan (AP) – The latest developments in Afghanistan, where a Taliban blitz has taken large parts of the territory just weeks before the final withdrawal of US and NATO troops:

President Joe Biden and other top US officials have been amazed at the pace of the Taliban’s almost complete takeover of Afghanistan, as the planned withdrawal of US forces immediately became a mission to ensure a secure evacuation.

Mask Policies: Know this before heading to these Cleveland area attractions

The speed of the Afghan government’s collapse and the ensuing chaos constituted the most serious test for Biden as commander-in-chief, and he was the subject of withering criticism from Republicans who said he had failed.

Biden campaigned as an experienced expert on international relations and has spent months downplaying the prospect of a rising Taliban, arguing that Americans of all political persuasions are tired of a 20-year war, a conflict that demonstrated the limits of money and military power to force. a Western-style democracy in a society that is not ready or willing to embrace it.

On Sunday, however, leading figures in the administration acknowledged that they had been taken by surprise at the full speed of the collapse of the Afghan security forces. The challenge of this effort became clear after reports of sporadic gunfire at Kabul airport caused the Americans to take shelter while waiting for planes to safety.

Suhail Shaheen, a Taliban spokesman and negotiator, told the Associated Press that the militants would hold talks in the coming days with the aim of forming an “open, inclusive Islamic government.”

Earlier, a Taliban official said the group would declare the Islamic Emirate Afghanistan from the presidential palace in the capital Kabul.

It was the name of the country under the Taliban government that was ousted by US-led forces after the attacks of September 11, 2001. The official spoke on condition of anonymity because he was not authorized to brief the media.

Child tax deduction: Where is my payment?

Afghanistan’s crisis-stricken president left the country on Sunday, joining his fellow citizens and foreigners in a stampede fleeing the advancing Taliban and signaling the end of a 20-year Western experiment aimed at rebuilding Afghanistan.

The Taliban, which had been on the outskirts of Kabul for hours, announced shortly afterward that they would move further into a city gripped by panic, with helicopters running overhead all day to evacuate US embassy staff.

Smoke rose near the building as staff destroyed important documents and the U.S. flag was lowered.

Several other Western missions were also preparing to pull their people out.

Afghans, fearing the Taliban could reintroduce the kind of brutal rule that virtually eliminated women’s rights, also rushed to leave the country, lining up at ATMs to raise their life savings. The desperately poor – who had left home in the countryside for the capital’s supposed security – remained in the thousands in parks and open areas throughout the city.

US Secretary of State Antony Blinken rejected comparisons with the US withdrawal from Vietnam, as many in disbelief watched the sight of helicopters landing in the embassy area to take diplomats to a new outpost at Kabul International Airport.

“This is obviously not Saigon,” he said on ABC’s This Week.

President Ashraf Ghani flew out of the country, told two officials to the Associated Press, and spoke on condition of anonymity because they were not authorized to brief journalists. Abdullah Abdullah, the leader of the Afghan National Reconciliation Council, later confirmed that Ghani had left.

“The former president of Afghanistan left Afghanistan and left the country in this difficult situation,” Abdullah said. “God should hold him accountable.”

In an astonishing route, the Taliban captured almost all of Afghanistan in just over a week, despite the billions of dollars the United States and NATO spent over nearly two decades building Afghan security forces. Just a few days earlier, a U.S. military assessment estimated that it would be a month before the capital would come under pressure from rebels.

The fall of Kabul marks the last chapter of the United States’ longest-running war, which began after the September 11, 2001 terrorist attacks, which was carried out by al-Qaeda’s Osama bin Laden, then housed by the Taliban government. A US-led invasion displaced the Taliban and repulsed them, even though America lost focus on the conflict in the chaos of the Iraq war.

For years, the United States has been looking for an exit to the war. Washington under then-President Donald Trump signed an agreement with the Taliban in February 2020 that restricted direct military action against the rebels. It allowed fighters to gather strength and move quickly to conquer key areas, as President Joe Biden announced his plans to withdraw all U.S. forces by the end of this month.

On Sunday, the rebels entered the outskirts of Kabul, but initially remained outside the city center. Meanwhile, Taliban negotiators in the capital discussed power transfer, an Afghan official said. The official, who spoke on condition of anonymity to discuss the details of the closed-door negotiations, described them as “tense”.

It remained unclear when this transfer would take place and who among the Taliban negotiated. Negotiators on the government side included former President Hamid Karzai, leader of the Hizb-e-Islami political and paramilitary group Gulbudin Hekmatyar and Abdullah, who has been a vocal critic of Ghani.

“We are trying to resolve the issue of Afghanistan with the Taliban leadership peacefully,” he said while the roar of a passing helicopter could be heard overhead.

“They tied our hands from behind and sold the land,” he wrote on Twitter. “Connect Ghani and his gang.”
The rebels tried to reassure the residents of the capital, insisting that their warriors would not enter people’s homes or interfere in businesses. They also said they would offer an “amnesty” to those who worked with the Afghan government or foreign forces.

“No lives, property and dignity will be harmed and the lives of the citizens of Kabul will not be endangered,” the rebels said in a statement.

But there have been reports of revenge killings and other brutal tactics in areas of the country that the Taliban have conquered in recent days. A female journalist, crying, sent voice messages to colleagues after gunmen entered her apartment building and knocked on her door.

“What should I do? Should I call the police or the Taliban?” Getee Azami cried, it was not clear what happened to her after that.

Many chose to flee and hurried to Kabul airport, the last route out of the country, as the Taliban now hold every border crossing. NATO said it “helps maintain operations at Kabul airport to keep Afghanistan connected to the world.”

The US embassy in Kabul later suspended all operations and asked the Americans to take cover, saying it had received reports of shootings at the international airport.

“You failed the younger generation of Afghanistan,” said Aisha Khurram, 22, who is now unsure whether she will be able to graduate in two months. “A generation… raised in modern Afghanistan hoped to build the country with their own hands. They put blood, effort and sweat into everything we had right now.”

Later, Afghan forces at the Bagram air base, home to a prison housing 5,000 prisoners, surrendered to the Taliban, according to Bagram district chief Darwaish Raufi. Imprisoned at the former U.S. base, both Taliban and Islamic State group fighters held.