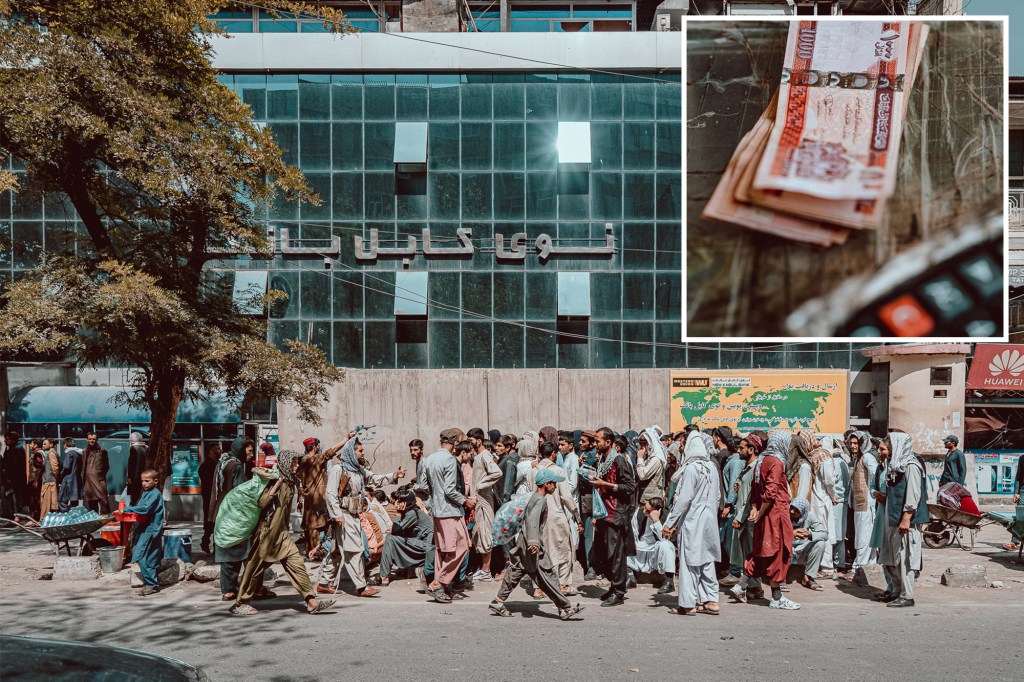 KABUL, Afghanistan – Ever since the Taliban took over Afghanistan’s capital on August 15, the country’s already fragile economy has been in despair.

With much of the international community refusing to recognize the Taliban regime, officially referred to as the Islamic Emirate in Afghanistan, hard cash is barely flowing in.

The currency has been crumbling, all the while the prices of essential commodities have been sky-high. And the financial crisis is fast becoming a humanitarian catastrophe.

The UN pledged more than $ 1 billion in aid to Afghanistan this week, warning that 97 percent of the population could soon fall below the poverty line, up from the figure before the Taliban’s takeover of 72 percent.

“We had a fragile economy before the takeover. Although a lot of (foreign) money was wasted after that, very little time or attention was given to the economy and economic development in the last 20 years, ”laments Muhammad Suleiman Bin Shah, Deputy Minister of Trade and Industry in recent years. Afghan government. “Money was mostly spent on security and political issues. And right now we are communicating everything in terms of trade and finance with the rest of the world. No matter what processes were started, even though they were moving at a snail’s pace, they have stopped now.

“People need to work, not line up at the bank. I myself found out that (the Taliban) have frozen my accounts. Accounts belonging to ministers, deputy ministers, deputy governors and members of parliament have been frozen.”

Most Taliban members themselves are not said to have received money for several months. As a result, a significant portion of the infantry live in areas outside major cities on little food and carry around on thin blankets to sleep in trucks or where there is adequate shelter.

Sources tell me that Taliban members are being “sponsored” by members of the community who provide them with food and other necessary supplies. They can also get handouts from commanders when they take over new areas or find cash.

Afghans come from far and wide to wait in line for the possibility of withdrawing the equivalent of $ 200, the maximum any Afghan can take from their bank account per week given the drastic cash shortage faced by the newly Taliban-controlled country.

“I did not receive (my military) salary for several months and now I have been waiting for three days to get some money out,” said 22-year-old Zargai, an officer in the now disbanded Afghan security forces, who traveled about 250 miles from Badakhshan to Kabul in an attempt to support his mother, brother, wife and daughter. His military salary would have paid about $ 300 a month. “I have no choice but to rejoin the Taliban military if I am asked to do so.”

And Azizi, a 28-year-old Parwan native and commander of the former army, tells me he has not been able to find any work since the defeat.

“The last time the government paid me was two months ago,” he continues. “I do not know what to do.”

According to many economic experts, an informal economy – known as the hawala banking system – may be the only way for Afghans, including the new government, to stay afloat. Hawala, an Arabic word for transfer, originated in the 8th century, primarily for trade along the Silk Road. Although still widespread in parts of the Middle East, Africa and Asia, it is based solely on the fee system: a sender is issued a tracking number to give to the recipient, who then picks up the money from an affiliated hawala merchant in another village, province or country.

But the off-the-grid approach is despised by global regulators. Incidentally, the Taliban themselves relied primarily on hawala to survive during their rebellion years.

Relying almost exclusively on such a system, which the Afghans have no choice but to do now, risks throwing the country further into being a pariah cut off from the international banking system, akin to North Korea and Iran.

Mohammad Yousuf Hamidi, a 37-year-old treasurer at Exchange Money, points out that the Taliban even banned hawala in their first two-week government when the banks were closed. While financial institutions have since been ordered to reopen, the scenario is uncertain as the currency continues to lose value and Afghans cannot afford the rising cost of goods and services.

“People used to come (in the stock market) a lot,” he says. “But now there is no money in the market and the business is down.”

The Taliban has historically relied heavily on the illegal taxation and trade in opium to bolster their bloody uprisings. But since the emirate has come to power and promised to enforce a strict interpretation of Islamic law, the leadership has promised not only to stop exports but also to burn the crops to stop ordinary Afghans from participating.

But the worse the economic stalemate gets, the more unrest the Taliban will be forced to fight – peacefully or otherwise – as struggling Afghans withdraw. Over the past week, protests have ignited on an almost daily basis in several major cities and have been met with scattered gunfire and mass arrests.

The emirate last week drew further condemnation from outside over the announcement of its tough government – which includes at least one U.S.-appointed terrorist, Sirajuddin Haqqani – and could face further international economic sanctions in the coming weeks and months.

“We have a ministry to manage all of that,” a Kandahar Taliban commander, Haji Asad, replied after questioning the country’s economic and security situation. “We want good relations with all countries. The only problem we have is that we do not want occupation. “

But for ordinary Afghans, the economic meltdown marks the beginning of another era of struggle to survive after decades of bloodshed and suffering.

Lal Aqa Aziz, who runs the popular Hamid Exchange Market, claims he has to trade on the small amount of emergency reserves he had before the abrupt change of government. He also notes that although former management would often hold auctions for licensed exchangers to obtain large amounts of US dollars – thus officials could control the flow and ensure that the value remained relatively stable – it is unclear whether the Taliban, unlike US dominance, will continue such a practice.

“We are just waiting for their policy. Everyone is in financial despair. No one knows what the next few days will bring,” he says softly from his dark basement office, below the once busy exchange. “Money still goes out, but nothing comes in. again.”