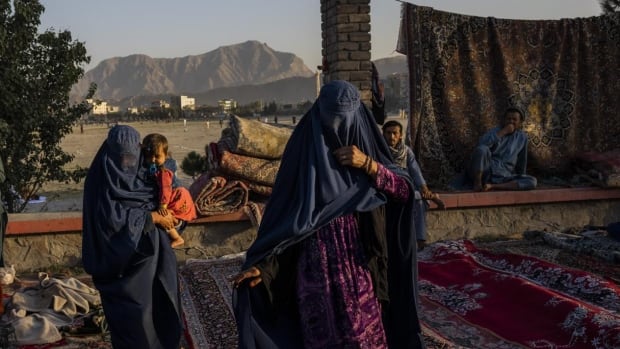 The day Afghanistan fell, Diba was helping patients when she received an emergency call from her mother informing her that the Taliban were in Kabul.

The 27-year-old medical student took to the streets to see women running and screaming – “as if there was an explosion.”

She boarded a crowded bus, where the ticket price had risen to 100 Afghans – a tenfold increase compared to the day before. Diba thought she was on her way home to safety, but said instead that she quickly found herself imprisoned in a “prison” under her husband’s control.

“My heart is broken, my body is in pain. I am a servant in my own home,” Diba said, adding that she now fears her husband more than the Taliban. CBC News does not use her real name out of concern for her safety.

In the more than 50 days since the Taliban swept across Afghanistan, Diba has only ventured outside her home once to visit her mother – and only after her husband gave her permission.

From her mother’s home, she spoke in Farsi to CBC News through a translator over Zoom.

Diba has been married for 2½ years and she and her husband have a one year old daughter.

Her husband had “patriarchal” views, she said, but reluctantly let her continue her medical studies. But when the country returned to Taliban control, her husband changed and began to beat her with frustration after losing his government job.

“One of my ears is not hearing properly because of his slaps. He threatened to call the Taliban and throw me out on the street without anything, even without my daughter,” she said.

The threats and beatings are increasing in frequency and becoming more violent, she said.

While attending medical school, Diba said she juggled a part-time job at a health clinic and earned the equivalent of $ 150 a month – more than four times the average income in Afghanistan.

Now the banks are not working and without a job the walls are closing. Not only has Diba lost the financial resources to escape, the organizations that could have helped her are no longer functioning.

The approximately 30 shelters that existed in the country have been forced to close.

In an email, Women for Afghan Women, a non-governmental organization that runs a network of safe homes for women fleeing abuse, said that “according to the Taliban’s strict orders”, no shelters can currently accept any clients. It has suspended its services indefinitely.

Human rights defenders are concerned about rising domestic violence against women and girls in Afghanistan as the few institutions and laws that once provided some protection have disappeared under the Taliban.

It is difficult to find solutions for Afghan women like Diba right now, said Heather Barr of Human Rights Watch, whose work involves monitoring human rights violations in the country.

“[The Taliban] gives permission to any misogynist who was grumpy about their daughters who went to school, or their wives who insisted on working or were insufficiently obedient, “Barr said.

Even before the Taliban took over, Afghanistan was ranked as one of the worst countries to be a woman. Domestic abuse was pervasive in Afghan culture despite attempts by the previous government to ban gender-based violence.

ONE 2019 UN survey found that in more than 80 percent of the reported cases of violence against women in Afghanistan, the assaults were committed by a family member, mainly a spouse. Researchers also analyzed 250 honor killings over a two-year period and found that the perpetrators were convicted 18 percent of the time.

The same study concluded that domestic violence was likely to be severely underreported in the country, and complaints were limited “due to usual structure and strong social norms.”

The majority of complaints of domestic violence were lodged with the former Republic’s Ministry of Women, which has since been disbanded by the Taliban, replaced by the Ministry of Promoting Virtue and Prevention of Load.

“We know from past experience what the Taliban’s view of domestic violence is. It’s very much about women being the property of their male family members, and male family members being able to do what they want,” Barr said. “Of course, not all men. But there will be some men whose behavior was held back by [legal] constraints built in society – but now they are gloves off. “

A ‘dark future’ ahead

Within days of the Taliban taking over in mid-August, female radio and television journalists were taken off the airwaves. Women were also removed from other jobs. Girls over the age of 11 have not yet been allowed to return to school.

There are also widespread reports that the Taliban are entering their homes looking for potential brides for their warriors. To protect girls from extremists, Afghan-Canadian human rights activist Murwarid Ziayee worries that families may force their daughters to marry other men at a younger age.

“They can pressure their daughters to marry someone at an earlier age – so their childhood is taken from an earlier age. Their dream of completing education will be taken from them and their future hopes of independence [will disappear], “said Ziayee.

Ziayee works for Canadian Women for Afghanistan, an organization that trains teachers and runs community schools in the country.

When the Taliban first came to power in 1996, Ziayee lived in Kabul and a month away from completing a law degree. The extremist group immediately prevented women and girls from going to school and confined them largely to their homes.

When Ziayee ventured outside without the burqa and without a male relative, she was whipped. She said she now watches with horror the déjà vu unfolding in her homeland.

“I know a dark future awaits my people,” she said.

Last month, there were sporadic protests from women demanding some form of freedom. Taliban fighters quickly dispersed the crowds by swinging whips and firing pistol shots into the air.

Nipa Banerjee, a senior fellow at the School of International Development and Global Studies at the University of Ottawa, was responsible for Canada’s delivery of assistance to Afghanistan between 2003 and 2006.

Currently, she said, the fight for women’s rights in the country must temporarily take a temporary back seat to provide humanitarian assistance.

According to the UN, every third Afghan does not know where their next meal is coming from. It estimates that next year, 97 percent of the population will fall below the poverty line, unable to earn another $ 2 a day.

Many donor countries, including Canada, have refused to recognize the Taliban’s legitimacy.

Canada does not provide assistance through the group, but rather through international organizations, such as the UN and the Red Cross. It has provided more than $ 27 million in humanitarian aid to Afghanistan by 2021 and is committed to providing $ 50 million more.

“If the Taliban choose to ignore fundamental human rights – the rights of women, girls and minorities – they should expect international isolation,” Tremblay said in an email.

“Canada has achieved significant results for women and girls in Afghanistan over the last 20 years. The preservation of these gains remains a priority for Canada.”

In addition to Afghanistan, Banerjee has worked in other Muslim countries, including Bangladesh and Indonesia. She said imposing a feminist lens on an Islamist state was “impractical and unrealistic” and would not only offend the Taliban but would further delay the delivery of aid, resulting in more strife.

“If our purpose is the welfare of women – to get them to study and earn an income – we can do so without raising the eyebrows of society or the government,” she said, noting that many Afghans are not against the Taliban.

Banerjee believes that as humanitarian conditions improve in the country, women will be able to return to work and schooling beyond the elementary level.

But Banerjee also warns that any improvements will be step-by-step and take years.

It’s not a comfort to Diba. Just six weeks ago, her ambitions extended beyond Kabul and into the countryside. Concerned about reports of women dying during childbirth, she read to a gynecologist and dreamed of working in remote villages.

Now her days are spent cleaning and cooking for her husband and in-laws. Diba said she often breaks down in tears – not just for herself, but for her daughter. She said she wanted so much more for both of them.