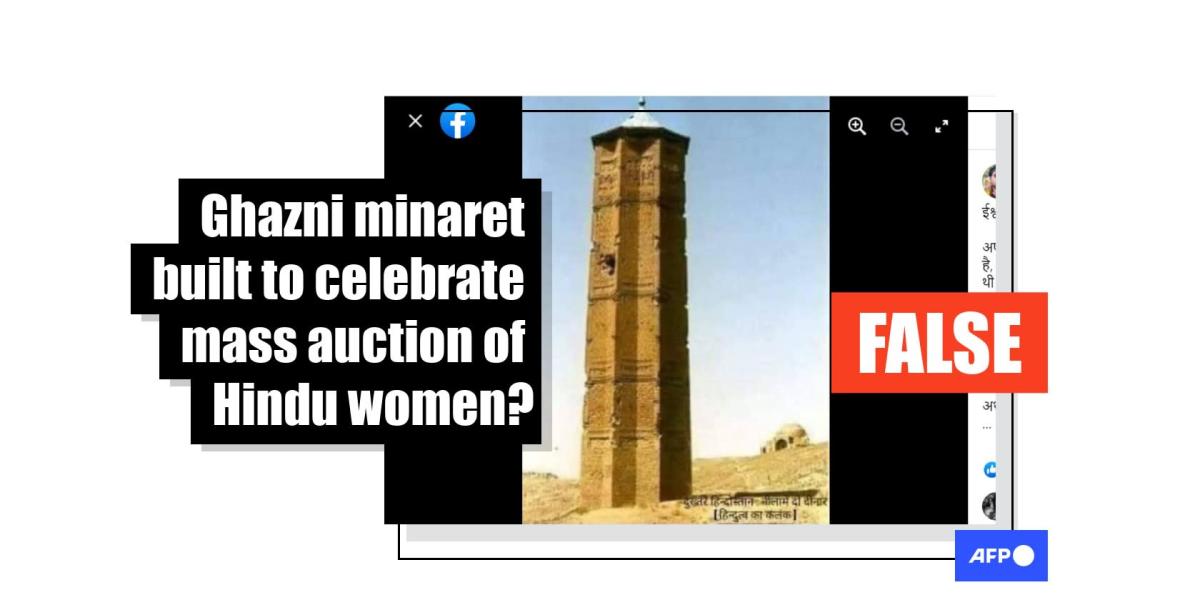 Several social media posts have shared a picture they claim shows the ruins of an Islamic building in Afghanistan containing Persian-language “inscriptions celebrating the mass auction of Hindu women”. But these posts are fake, according to several researchers. The picture shows a minaret on the outskirts of the Afghan city of Ghazni with Arabic-language inscriptions that do not refer to the auction of Hindu women, a historian told AFP.

It appears to show a minaret – an Islamic building that typically stands next to a mosque.

“Hindu women were auctioned off on a terrace in a large square on the outskirts of the city of Ghazni in Afghanistan by invading Muslims, who also built a minaret to celebrate this mass auction,” the Hindi-language post states.

The image circulated online after the Taliban took control of Afghanistan in August 2021.

It has also been shared thousands of times along with a similar claim in Indian languages ​​including Hindi, Marathi and Punjabi.

But these posts are fake.

Several researchers confirmed to AFP that the picture in the posts shows the Bahram Shah minaret in the Afghan city of Ghazni, which is located southwest of the capital Kabul.

Bahram Shah was a 12th-century ruler who ordered the construction of the minaret.

The minaret does not contain the inscriptions listed in the fake entries, they say.

Manan Ahmed, an associate professor at Columbia University’s Department of History and a historian from South Asia, called the posts “a forgery.”

“I can confirm that no structure was built to celebrate or celebrate the sale of ‘Hindu’ women,” he told AFP.

Viola Allegranzi, a historian specializing in monuments from the Ghaznavid period, also told AFP that the alleged inscriptions in the posts are “fake”.

“The sentence is clearly a false reading of the inscription on the minaret. [The inscription] is in Arabic and contains the name and titles of the Ghaznavid Sultan Bahram Shah. “

“A few historical monuments survive from the Ghaznavid and Ghurid periods in Ghazni (late 10th to early 13th century), and none were intended to celebrate an auction of women.”

Allegranzi sent AFP for a reading of the inscriptions in the minarets of the region published by the French scholar Janine Sourdel-Thomine in 1953.

The Arabic text found on the panels and quoted in Sourdel-Thomin’s research article is translated into: “In the name of God, the Merciful: the King of the Great Sultan (King) of Islam, the Right Hand of the State, the Guardian of the Nation, Abou El Mouzaffar Bahram Shah. “

There is no reference to a so-called “auction” of Indian women in the newspaper.

AFP found that the earliest version of the misleading post in Hindi was published on September 15, 2015 here on the website of the Hindi-language newspaper NavBharat Times.

Various versions of the scam have been circulated here and there by politicians affiliated with India’s ruling Bharatiya Janata party.