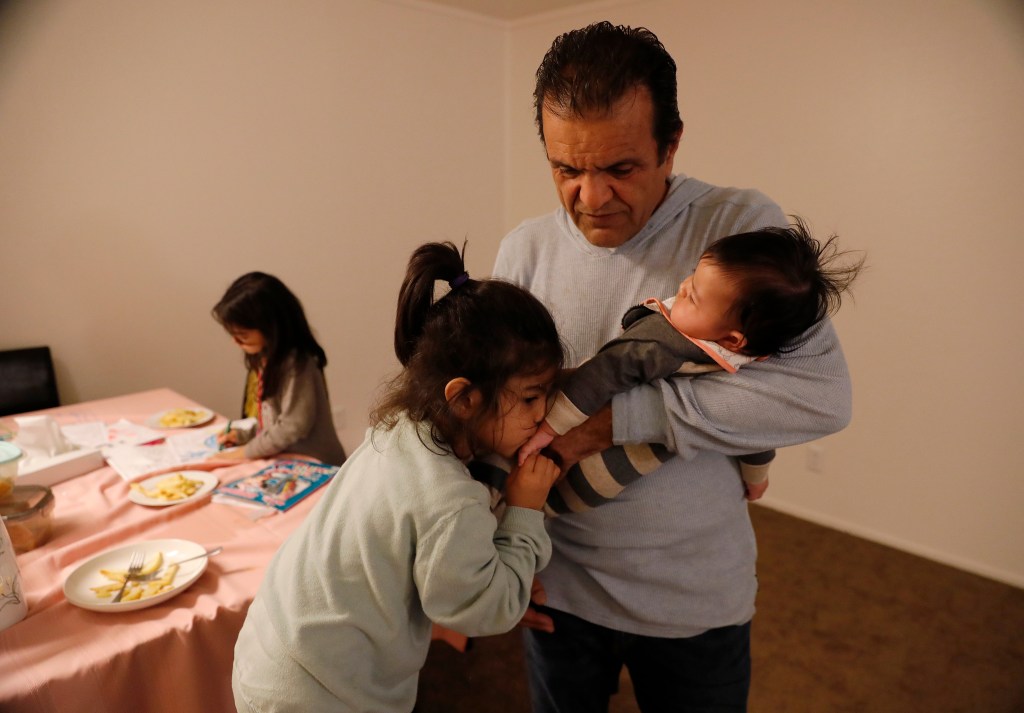 The day before Thanksgiving, Sayed Hofioni finally opened the door to her family’s new home.

His daughters, Kowsar, 5, and Zainab, 3, hurried in with big eyes and giggling. His wife, who bundled their 3-month-old baby in her arms, followed closely. It was three months ago that they fled Afghanistan by military plane – and almost as long as they had spent waiting for a single room in a hotel in Contra Costa County. The little place consumed the whole family, and every day Hofioni’s daughters asked him, “Low,” which means father in their mother tongue dari, “when are we moving from here?”

When the family finally found a home late last month in Antioch, the one-bedroom apartment before them felt unreal.

“I saw a very good smile on my family’s faces,” said Hofioni, 55. “After all we’ve been through, it was priceless.”

The Hofionians are among the hundreds of Afghans who have arrived in the Bay Area since August. When they first landed in California, they were greeted by resettlement agencies, non-profits and the county government, all of whom tried to help them do the almost impossible: find a cheap home in one of the country’s most expensive housing markets.

“Every night I could not sleep because I thought: What can I do to find a house for this family?” said Yasamin Taher, Hofionis’ case officer at Jewish Family & Community Services East Bay (JFCS). Landlords often require tenants to earn three or four times the monthly rent – plus security deposit. I thought about them all the time. “

As the crisis in Afghanistan unfolded, Governor Gavin Newsom called California “a haven” for Afghans fleeing the Taliban, citing the state’s large Afghan population as proof of its hospitality. In 2019, 41% of all Afghan immigrants in the United States lived in California, where Fremont and Concord house some of the largest Afghan populations nationwide.

But in early September, the State Department discouraged Afghans from resettling in the Golden State, warning that refugee benefits would hardly cover the cost of living. Still, with more than 5,200 refugees expected to arrive in California, the state is expected to receive more Afghans than any other state – almost the entire number of those expected to arrive in the next two most populous states, Texas and Florida , together.

Having lived in the Bay Area decades earlier, Hofioni believed that his knowledge of the region, along with its large Afghan community, would create a soft landing for his family. This is how California felt the first time he fled Afghanistan in his early 20s. He lived in California, Nevada and Virginia before returning to his home country in 2011, where he married, had children and began settling down. Instead, just 10 years later, Hofioni found himself on the run from Afghanistan again.

The second time he came to California, he was faced with a new set of challenges.

In August, the moment the Taliban conquered Kabul, Hofioni hurried his family to the airport in a desperate attempt to leave the country.

He was sure that his 16 years in the United States – along with the citizenship he received while living there and his work teaching the Afghan language and culture to American soldiers – would endanger his family. (The family asked the Bay Area News Group not to identify his wife out of concern for her family’s security in Afghanistan.)

For days, they tried to penetrate the swell crowds. When the family fled in a military plane, their youngest of three children, Tajalla, was only 10 days old. “It was very hard, especially for my wife,” Hofioni said. “Ten days after having a caesarean section, she spent nights and days at the airport. But she is so strong. She never stopped being brave. “

From Doha they flew to Italy. From Italy to Philadelphia. And from Philadelphia, they landed in Oakland, weeks after closing the door to their home in Kabul.

Bay Area resettlement agencies, which include the International Rescue Committee (IRC) and the JFCS, are helping refugees make the transition to their new lives in the United States. But at the same time, the agencies are overwhelmed.

Jordane Tofighi, director of IRC in Oakland, said the organization is finding that refugees arrive only 24 to 48 hours before landing – as opposed to a typical processing time of between two weeks to several months to prepare individual resettlement cases. .

During the first month of the organization’s fiscal year, which began on October 1, the IRC saw 208 Afghan refugees – 80% of their total capacity for the full year, Tofighi said.

After fleeing the crisis, thousands of Afghans arrive in the United States without a job, credit score or rental history. As a US citizen, Hofioni is supported by a slightly different combination of organizations, but the challenges remain the same. In Contra Costa County, the average monthly rent for a two-bedroom apartment is $ 1,866 – 70% higher than the national median. If a landlord requires tenants to earn three times as much, Hofioni must earn over $ 67,000 a year.

Doubting where he could afford to settle, Hofioni has struggled to find work in the Bay Area. Previously, he worked in a non-profit with a focus on reducing gender-based violence in Afghanistan. He taught language and culture to American soldiers at a military base in North Carolina. He has been driving a taxi in San Diego. And he’s been a blackjack dealer in Las Vegas. But with back and forth about the dwelling, he was not even sure where to look for his next job.

“When you come from another country, you think you’re coming to America and everything will be there,” Taher said. “But when they arrived, it was a different story.”

Their first hotel room had a small kitchen, a cramped seating area and a single bed. Crowded in every corner were things for the girls: diapers, backpacks, books, formula. Their second hotel, Hofioni said, was not much bigger.

But today they have two bedrooms in their own apartment. JFCS will help the family with rent over the next few months, Taher said, until Hofioni and his wife can find their own job.

Despite all the challenges, Hofioni said he never gave up on the state where he dreamed of building a new home.

“I love California – who does not?” he said. “I would try to come here and have a better life for my kids and my family. That’s all I really want.”

This story was published in association with the Stanford Journalism Program.