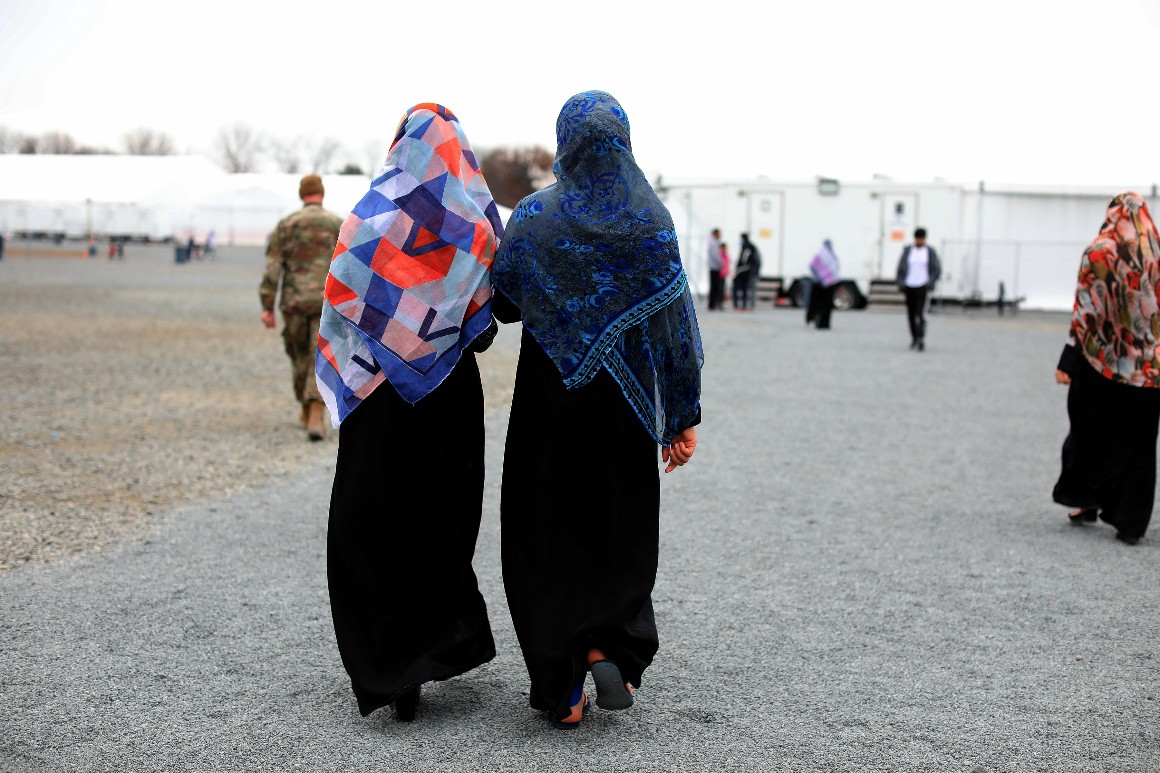 “It’s really cold. You can not go outside to go,” said Siddiq, who sent pictures of himself with US troops, which he translated into Afghanistan. “It’s really boring here. There’s nothing to do. They teach English, but I know English. ”

In a sense, Siddiq, whose surname is withheld to protect relatives still in Afghanistan, is one of the less fortunate Afghans who have reached the shores of the United States. Already, more than half of these arrivals – about 44,000 people as of Thursday – have begun living outside military bases, though they face the challenges of this move. Nearly 29,000 Afghans are left at seven military bases in the United States, and about 2,900 Afghans are still abroad on a handful of U.S. military posts, waiting for a flight to America.

The resettlement process has been slowed by difficulties ranging from a measles outbreak among evacuees to a lack of affordable housing in US cities – the latter being one of the reasons Siddiq has been told he and his family are still in Fort McCoy. The Corona pandemic has not helped. And the investigation of Afghans for security risks takes longer in some cases for various reasons, such as lack of paperwork.

Still, given the chaos of the initial evacuation in August – when desperate Afghans fell to their deaths from planes leaving Kabul and several potential evacuees were left behind – US officials and refugee activists are praising the resettlement effort so far.

Operation Allies Welcome is the largest U.S. resettlement effort in decades, and it had to be completed far sooner than most had expected due to the Taliban’s astonishingly rapid takeover of Afghanistan, in which virtually all major cities fell in 11 days. The United States is in the process of closing camp operations at domestic military bases in mid-February. Such an operation has already been completed, but a further seven are still ongoing.

“How is the process going? I think miraculously well given the cards we were given,” said John Slocum, interim CEO of Refugee Council USA, an organization that helps with the resettlement effort. “We have basically built a giant plane while flying that.”

In the larger scheme, however, the work of helping vulnerable Afghans is far from over.

Thousands of Afghans who have fled the war-torn nation in the months since the airlift ended in August are searching through various programs to get a shot at life in the United States. Some are in places like Pakistan, and they may have direct or indirect connections to America, whether through family or business or government agencies, they served in the 20 years the United States fought in Afghanistan.

U.S. officials are also still arranging flights for eligible Afghans staying in Afghanistan, a careful and slow process that is expected to last for years – if the country’s Taliban rulers continue to cooperate. So far, the Islamist militia has not imposed major roadblocks for people who want to leave, U.S. officials say.

Nevertheless, “it’s not easy and there are challenges with every step and escape,” said a U.S. official familiar with the ongoing evacuation efforts. “The number of people applying for the different immigrant categories is growing every day.”

Some estimates of the number of Afghans potentially eligible to be relocated to the United States run into the hundreds of thousands.

The tens of thousands of Afghans who have reached the United States did so after four years in which the Trump administration essentially sought to end the U.S. refugee resettlement program.

U.S. government divisions and public-private partnerships that for decades had helped resettle people like the fleeing Afghans had been decimated. Under Trump, NGOs that helped resettle refugees were forced to close offices, fire employees and let go of relationships with landlords who provided housing opportunities for newly arrived refugees.

President Joe Biden again promised to welcome refugees to the United States, and by early 2021, the same organizations had begun to slowly rebuild. But the unexpected, massive Afghan evacuation in August put a turbo on this reconstruction effort, even though it originally taxed existing staff and resources.

The events of August have prompted an infusion of more than $ 6 billion in federal dollars into resettlement efforts. There has also been a jump in private donations and volunteers, as well as offers of assistance from companies like Airbnb to the U.S. groups helping refugees relocate.

These organizations have managed to open dozens of new offices to help deal with the Afghan people, infrastructure that they hope to use in the coming years, when the traditional US refugee program – which receives a limited number of people each year from all over world – returns. to his state before Trump.

On Thursday, the Lutheran Immigration and Refugee Service – one of the resettlement organizations working with the federal government – launched a new office in the Peace Lutheran Church in Alexandria, Virginia.

Dozens of people celebrated the opening of the office, which will help newcomers deal with everything from finding jobs to enrolling in school. LIRS has hired some of the recent Afghan arrivals to help handle cases.

The Alexandria office is one of 13 new sites LIRS has launched after having to close 17 due to the Trump years, said Krish O’Mara Vignarajah, president and CEO of LIRS.

“We are not done; every week, every month we add new community partners and sign up for new volunteers, ”she said.

Many of the Afghans now resettling in the United States are not considered refugees in the legal sense, which is why the term “evacuated” is often used. Regardless, organizations like LIRS help the evacuees because of their experience and know-how to resettle refugees, who also flee from similar situations and often start over in America with few resources.

The Afghan-American community as well as other majority Muslim diaspora communities have gone up with donations and offers of cultural assistance. No matter how much help they get, Afghans who are new to the United States are often startled by the obstacles they face.

For example, there are companies that do not take cash, but the Afghans who seek the services may not have set up bank accounts yet. Many of the Afghans know English – and almost half are children, so they are likely to pick it up quickly – but others struggle with the language. Enrolling children in school when the pandemic has severely affected school schedules for all is another challenge. Even the lack of affordable housing is surprising to people like Siddiq.

“America is a great country!” he points out in disbelief.

There is also persistent uncertainty about how long many of the evacuees will be able to stay in the United States. Many have been allowed on American soil under what is known as the Humanitarian Probation Program.

Congress has approved legislation that will make probationers eligible for benefits similar to those given to refugees whose arrival in America usually comes after many months or years of security and other investigation.

However, the humanitarian probationary status lasts only two years. While some Afghans may qualify for long-term programs, such as special immigrant visas granted to Afghans who have translated into the U.S. military or are otherwise eligible, others may find themselves having to seek asylum or in limbo.

Advocates for refugees urge US lawmakers to give Afghan inmates a more permanent status. The Biden administration has expressed support for legislation leading to it.

“We will continue to welcome further qualified Afghans over the coming weeks, months and years to support those who have stood with us through our two decades in Afghanistan,” said a senior Biden administration official in a declaration.

Refugee activists are particularly concerned about relocating Afghans to the US asylum system. The bar for evidence and access to that program is often so high that many people who are really in danger cannot meet it.

For example, it may be impossible for Afghans to present documents required by asylum judges if these materials are left in Afghanistan and under the control of the Taliban government.

Ali, an Afghan who managed to get out of the country in August and now lives in Virginia on parole, is among those likely to apply for asylum if no other way opens up.

Ali, who asked that his real name not be used to protect relatives still in Afghanistan, said he is not sure what his future brings, but he wants it to be in America.

He can try to look for work as an educator.

“I felt safe now, I’m in a peaceful place,” he said. “There is no fear of kidnapping, murder.”