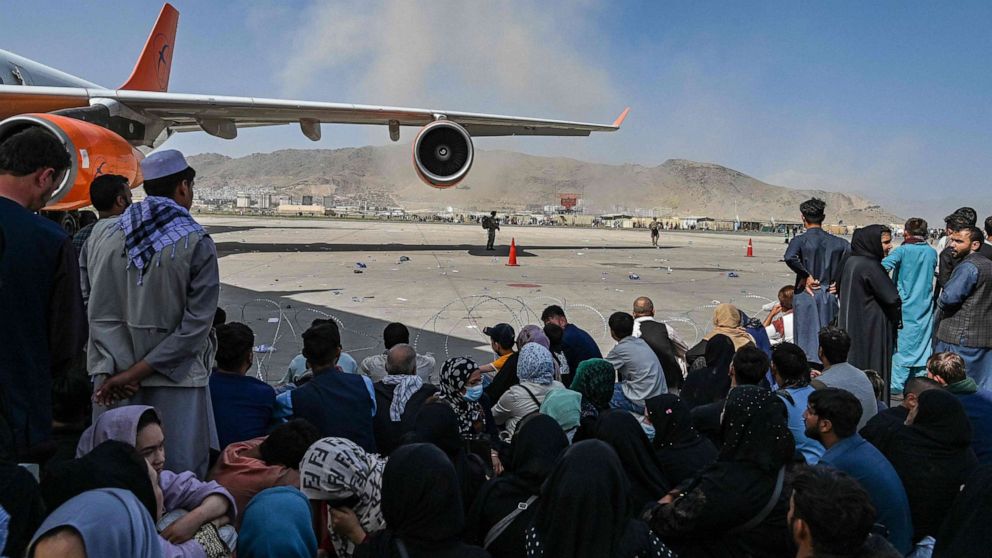 Just 10 days ago, Ahmad and his family lived at home in Kabul, Afghanistan. Now they are starting a new life in the United States

“It’s quite different and I like it. It’s something I’ve never imagined before, ”Ahmad told ABC News. In this report, he will only be mentioned by his first name to protect his family.

“Peace. Peace … You are free, you can go anywhere, you can do anything, you enjoy your life. And most importantly [is] that we have a better future for children. ”

Within a few short weeks after the departure of US troops, Ahmad’s homeland of Afghanistan quickly fell to the Taliban, an Islamic military rebel group. This disastrous result came after 20 years of US forces fighting there and spending nearly a trillion dollars. Nearly 2,400 Americans, 66,000 Afghan military fighters and over 47,000 Afghan civilians were killed in the decades-long war.

“I just missed … what’s going on in Afghanistan. This week I came here, and then next Friday. It was under Taliban control,” he said. “I’m very lucky, and I’m happy about that.”

Ahmad said it took him a year and a half to get out of the country and now it is “impossible” for the thousands of other Afghans trying to flee.

Ahmad worked for years on logistics and supplied equipment to the US and Afghan forces in Kabul. But his affiliation with the West made him a target for the Taliban, despite its assurances that those working with the United States would not be harmed.

His special immigrant visa, or SIV, was finally approved this month, allowing him, his wife and their two daughters to get out.

“The situation in Afghanistan … for me, for my family, for my children, there was no future,” he said. “So that’s why I decided to move.”

Yet most of their family is trapped at home and in danger. ABC News agreed not to disclose the full name of the family or where they are to avoid retaliation against their relatives.

“God save them. And they should save themselves, they should save themselves,” Ahmad said [they] go out they will be caught on, on the road, and [the Taliban will] put them in jail … We can not say anything. I just told my friend … Please change your location, do not be one place … do not get caught by the Taliban. Whatever you can do. Just do not be at your address, do not be in your home, or do not be in places where people can find you. That’s the only thing I can tell my friends and colleagues in Afghanistan. “

Ahmad is concerned about the Taliban’s restrictions that will affect women in the country, including rules not to wear nail polish and not to be allowed in public without a male guardian.

However, he believes that women will “definitely” fight back for their freedoms.

Without the support and protection of the US military, the success of women in the country seems hopeless.

Ahmad did not expect the war to end like this.

“We expected a peace in Afghanistan … a country where all people should have their own rights, their own freedom, but right now we went back. Twenty years ago, the same place we were then,” he said. “It does not make me angry, but it makes me sad. Knowing that America came for a purpose, they achieved their purpose. We can not force them to stay in Afghanistan and fight on our behalf.”

For Americans who served in the war, and for a generation of Afghans who saw the promise of progress, many wonder if their sacrifices were in vain. Those left in the country can pay the highest costs as the situation grows more by the minute.

Scenes from Kabul show thousands rushing to flee the airport, with adults and children hanging from planes while trying to take off. Six thousand US troops have now been ordered to go directly to Kabul to assist in the evacuation of US personnel and Afghans who have helped the US mission, a US official told ABC News.

Ahmad decided to work for the United States in 2016.

“It was a great financial support for my family to live,” he said. “We thought it would help our country work with the US government, and somehow we are helping our country drive the planes against the attackers.”

He did not know that his work would make him a target for the Taliban.

“[In] the beginning, my neighbors, my relationships, my close relatives… they tried to convince me not to work with the US government, ”he said. Then, he said, he and his family were threatened with calls and knocks on their doors.

Ahmad says he believes Afghanistan’s rapid decline was a cause of the country’s weak government.

“They did not build [the government], then build their strength. They are all dependent on the US government’s support for the US military [for] 20 years, they [were] just rely on other forces. British or Australian forces. They did not want to build their own ability or ability to control. “

He said he blames “ourselves” for the downfall of his country.

He can not predict when he will return to his homeland, but says if the regime changes and if “there is peace, I will return.”