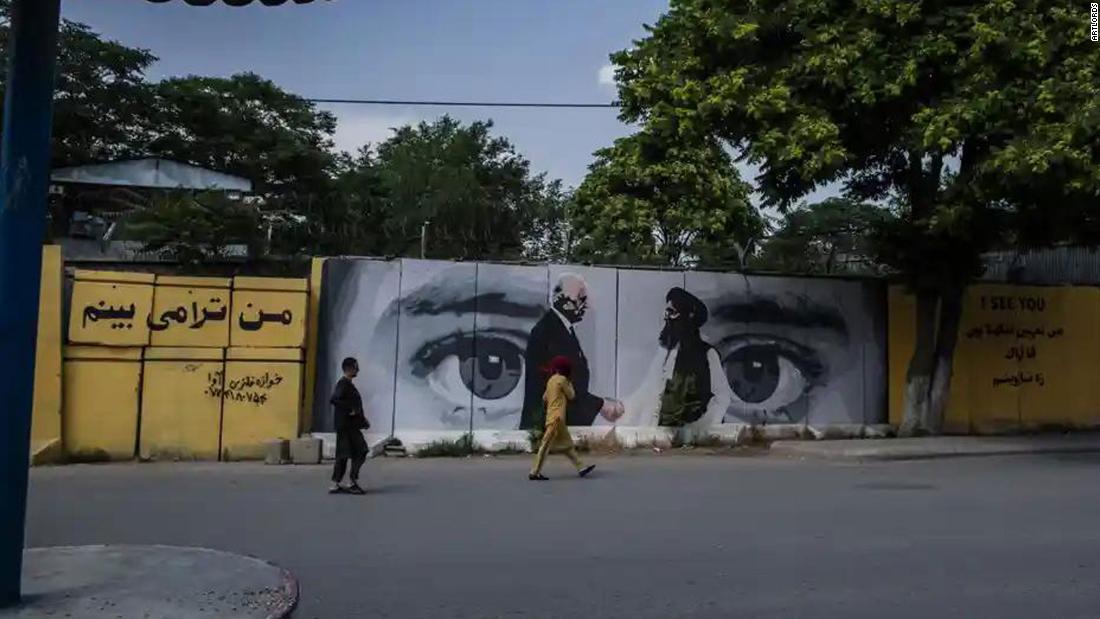 Residents of Kabul can read the writing on the wall. “Do not trust the propaganda of the enemy,” says a freshly painted sign.

The message replaced a mural by US envoy Zalmay Khalilzad and Taliban leader Mullah Abdul Ghani Baradar who shook hands, marking the signing of the 2020 agreement to withdraw US troops from Afghanistan – one of dozens of living public works of art that has been deleted since the Taliban took power in August.

The Taliban paint over a mural in Kabul and replace it with text that reads “do not trust the enemy’s propaganda”. Credit: ArtLords

While some of the murals were obvious in their demands for equal rights for women and an end to corruption, other works were intended to arouse reflection, inspire hope and spread joy to passers-by. Today, they are obscured by thick layers of paint, as well as Taliban slogans and flags.

The move has been received as a warning shot to the country’s art and culture scene. “The biggest fear for me, and most of the artists I work with … is not being able to express ourselves, to criticize the power,” said curator Omaid Sharifi over WhatsApp. He is the co-founder of ArtLords, a grassroots art initiative that has transformed protective explosive walls into places of creative expression for nearly a decade.

A mural in Kabul depicting the US-Taliban peace agreement in Doha has been painted over and replaced with black and white text. Credit: ArtLords

“The fear is that this society will just turn black and white … (and) that we will no longer have the beautiful diversity and beautiful colors of this country.”

This is not the first time the Taliban has taken a stand against art in Afghanistan. When the Taliban last came to power, from 1996 to 2001, the regime violated public paintings and destroyed cultural heritage sites around the country. In 1996, members machine-guned an iconic fountain in the city of Herat in western Afghanistan; while in 2001 they blew up two colossal statues of Buddha that had looked out over the Bamiyan Valley for 1500 years. Most forms of music were banned and television was declared un-Islamic.

The tough group insists their rule will be different this time. But many artists are skeptical.

As Sharifi sees the Taliban destroy nearly 100 of the murals he and the ArtLords team produced, Sharifi sees no room for artists to thrive under a Taliban regime. He, along with many of his colleagues, has either fled Kabul or is living in hiding.

Some artists, he added, have made the difficult decision to destroy their own work for fear of retaliation. “The feeling of destroying a work of art is not very far from losing a child … because it’s your own creation. It’s something you have memories of … something you’ve dreamed of,” he explained. “Suddenly you set fire to it – to all your dreams your hopes to all your hopes.

A mural pays homage to the killing of George Floyd and Afghan refugees drowned in Iran read “we can not breathe”. Credit: ArtLords

An artist and gallery owner who asked to remain anonymous said that having to destroy his own work is a “wound that will not be healed.” He is also worried about his livelihood and tells CNN that the closure of the gallery has threatened his income.

“I thought that through my art I might be able to solve my family’s financial problems,” he said. “We spent our youth serving in the hope that we might have a better tomorrow, however [it’s] so sad what kind of people determine our future in this country. “

An Afghan artist burns his artwork in a studio days after the Taliban took over the country. Part of this image has been blurred by CNN for security reasons. Credit: ArtLords

A female artist, who also shared her story on condition of anonymity, felt the stakes were higher because of her gender. She told CNN that ever since the center where she took art classes was closed down, she no longer has a place to practice her art. She explains that it is easier for her male classmates to resume their art than it is for women like herself.

“Boys, they can go to a teacher’s home and they can continue their work from there. They can gather informally … But for girls, it is not possible to do that,” she said. For women, she added, it is uncommon to meet in a place that is not a formal center for learning. “We’re so scared of what might happen that we do not even want to try it.”

Art students say she is afraid to show off her drawings of uncovered female faces under Taliban rule. Credit: Anonymous

She also feels oppressed because of her subject. Specializing in portraits of women, she fears that if her work is seen by the Taliban, she will be subjected to retaliation. “Women’s faces are not meant to be exposed. That is wrong according to the Taliban.”

She would like to continue her practice, but says that the studio, which was once a safe place for her creative expression, is now a stationery store. She hopes her drawings can be seen by the world, but so far she has to find a way to continue making art in Afghanistan.