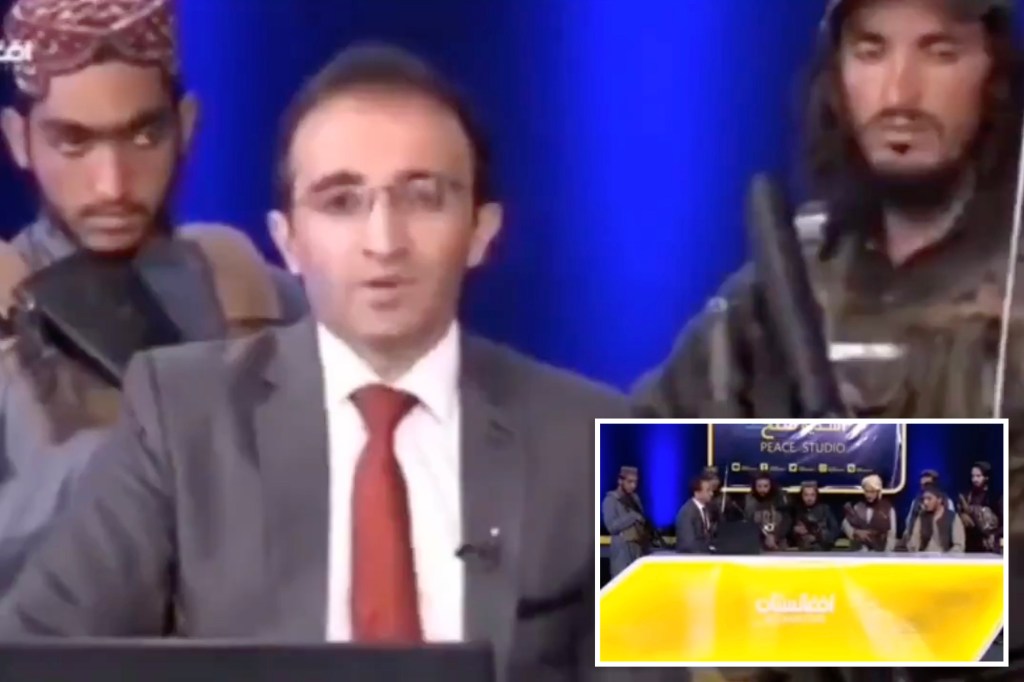 An Afghan anchorman was caught in the unenviable position of reading the news while surrounded by armed Taliban fighters – as he told his viewers to “not be afraid.”

The nervous presenter of Afghan TV’s political debate program Peace Studio is seen speaking, while two extremists stare from behind and six others surround them after they apparently stormed the studio, according to Unilad.

“This is what a political debate looks like now on Afghan television, Taliban infantry keeping an eye on the host,” the BBC said. said Yalda Hakim in a tweet.

“The narrator talks about the collapse of the Ghani government and says the Islamic Emirate says the Afghan people should not be afraid,” she added of the Sunday broadcast.

“With armed Taliban fighters standing behind it, the presenter of Afghan TV’s political debate program Peace Studio says the Islamic Emirate (the Taliban’s preferred name) wants the public to ‘cooperate with it and not be afraid’.” Sharifi tweeted.

“The program is called Pardaz. In this longer video, the presenter interviews a Taliban fighter who is likely to outcompete the rest of the party in the studio. The presenter changes from dari to pashto, which I unfortunately do not speak, ” he added.

Iranian journalist Masih Alinejad called on President Biden to watch the clip and “let us know if these militants posing behind this visibly petrified TV host are holding American weapons.”

She wrote: “This is surreal. Taliban militants pose behind this visibly petrified TV host with weapons and make him say that people from #Afghanistan should not be afraid of the Islamic Emirate.

“The Taliban itself is synonymous with fear in millions of people. This is just another proof,” Alinejad added.

The hostage-style video surfaced as the Taliban tried to sell a softer image in a propaganda campaign following the last repressive rule of the Islamic militant group about 20 years ago.