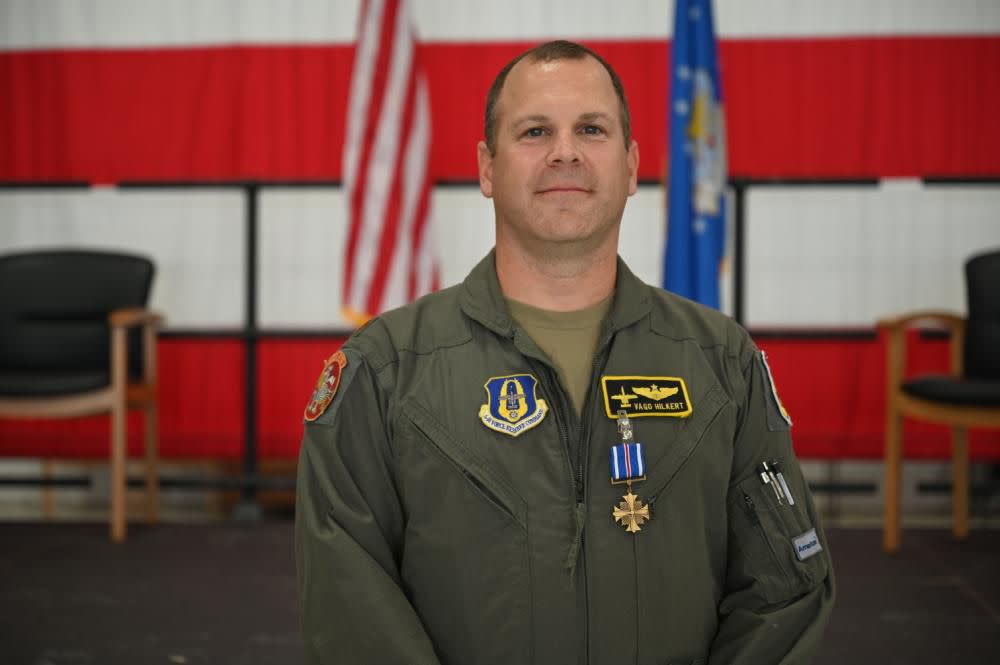 An A-10 Thunderbolt II pilot at Whiteman Air Force Base, Missouri, was recently pinned on the Distinguished Flying Cross for actions he undertook more than a decade ago during a combat search and rescue mission in Afghanistan.

Lieutenant Colonel Mike Hilkert, Chief Operating Officer of the 303rd Fighter Squadron, received the DFC with bravery on October 2 through a combination of support from local leadership and a bit of retrospect. The military’s seventh-highest award honors heroism or extraordinary achievement during air flight, especially in shaky combat situations.

On April 23, 2011, Hilkert coordinated the movement of 21 aircraft in a fight that lasted more than six hours, according to the 442nd Fighter Wing at Whiteman. The mission required securing two landing zones, scooping up two pararescue jumpers and a shot down OH-58D Kiowa helicopter pilot and helping 32 soldiers evacuate the area.

“He repeatedly put his plane in danger of pulling fire away from rescue helicopters and was instrumental [in] save the lives of more than 30 soldiers and pilots, ”said the wing on October 29.

The wing now calls it “one of the most intense combat rescue missions in the Afghanistan war.” But at the time, chaotic CSAR driving was a routine occurrence, 442nd Operations Group Commander Colonel Michael Leonas told the Air Force Times.

Several pilots have previously won awards for the mission, including four silver stars and three distinguished flying crosses of bravery. Ten years later, with a renewed award application and new leaders supporting him, Hilkert has joined their ranks.

“It’s bittersweet,” Hilkert said of receiving the DFC in a Oct. 28 press release. “I am honored to be among a group of heroes who did their best in a bad situation. Several people lost their lives during this mission, so it was not all high fives when we got home. We flew back to Kandahar in silence. “

That day in 2011, Sgts employees. Zachary Kline and Bill Cenna responded to retrieve two army pilots – one of whom was dead – from a downed helicopter in northeastern Afghanistan. After the pair rescuers fell down to the crash site, they came under heavy fire from an unnamed enemy that prevented them from escaping and hit their two HH-60 Pave Hawk helicopters as well as a pilot on board, Tech. Sgt. Jim Davis.

The shot was so hard that Kline, Cenna, the surviving pilot and a third pararescue jumper were unable to hoist themselves up in a Pope Hawk, so the helicopter sank to them in a “daring one-wheeled hover,” said the air force. .

While one HH-60 was on its way back from ferrying Davis out to medical care, the other went to a nearby front operating base for fuel and ammunition.

“When they boarded, however, they discovered that the aircraft had been badly damaged and had lost most of its primary transmission fluid. They called to return to Bagram Airfield and pick up an additional Pave Hawk,” the Air Force said in the announcement.

As Kline and Cenna crouched behind a rock outcrop to dodge the bullets, the Kiowa helicopter they had been sent to burst into flames as it was hit by enemy fire.

“The two frolic against a nearby ravine before the fire triggered the ammunition that was still on the helo,” the air force said.

The troops needed reinforcements to get to the Kiowa crash site. So they summoned three A-10s, including the one flown by Hilkert, the call sign “Vago”, which kept an eye on a ground attack force elsewhere.

The change of plans turned out to be a hectic night.

“I can only imagine how ‘Vago’ must have felt after probably consuming more than 3,000 calories of seafood and beef and then carrying 10 Rip Its in his flight suit out of the food hall, back to the Expeditionary Fighter Squadron, and then gone and flew a 10-and-a-half-hour excursion, ”said 442nd Operations Group’s Deputy Commanding Lieutenant Colonel Rick Mitchell, who was deployed along with Hilkert, in the announcement.

The other two A-10s began searching for the downed Kiowa pilot and PJs, and Hilkert worked with various air operations centers and the Joint Personnel Recovery Center to create airspace restrictions and communications.

“About half an hour later, the enemy maintained Kline and Cenna with renewed powerful machine gun fire at close range,” the statement said. “While Hilkert was in the process of joining the tanker to take fuel, he found the threat and marked the target 50 yards from the two PJs.”

Two A-10s fired back with Warthogs’ 30mm cannons, saving Kline and Cenna’s lives, the Air Force said. But they were not finished yet.

Later in the morning, two groups of 16 Army soldiers were also hit by enemy fire, killing one member and wounding others.

Hilkert looked through binoculars to keep an eye on one group and used the A-10s for the other while figuring out where the enemy was set up nearby.

To add to the multitasking, he updated all aircraft at their positions so that AH-64D Apache helicopters could launch air strikes without hitting other members of the US-led coalition. He also summoned a tanker over his head and gave surveillance aircraft the task of searching for enemy positions.

A-10 pilot honored for landing his warthog without working landing gear, cockpit canopy

“In the meantime, have [Pave Hawks] and two Apaches in a four-ship rescue formation… picked up a wounded member of one of the QRFs. “When they came under heavy fire, they were repeatedly forced to retreat and reset the formation until the Apaches destroyed the enemy’s position with their Hellfire missiles,” said the air force.

Hilkert hoped to distract the enemy from the helicopters so they could land and bring out the wounded soldier. He repeatedly flew within range of the opposing forces, trying to get them to fire their ground-to-air weapons at him instead of the rescuers.

The maneuver worked and an HH-60 lifted the soldier out. Rescue crews also picked up the Kline, Cenna and Kiowa pilots later.

Hilkert continues to serve in the Air Force Reserve.

“Even though he was not with [’Kansas City Hawgs’] at that time, many of our current members were sent to Kandahar with him, ”442nd Fighter Wing wrote on Facebook. “We are honored to have [Reserve citizen airmen] just as he is serving with us today. “