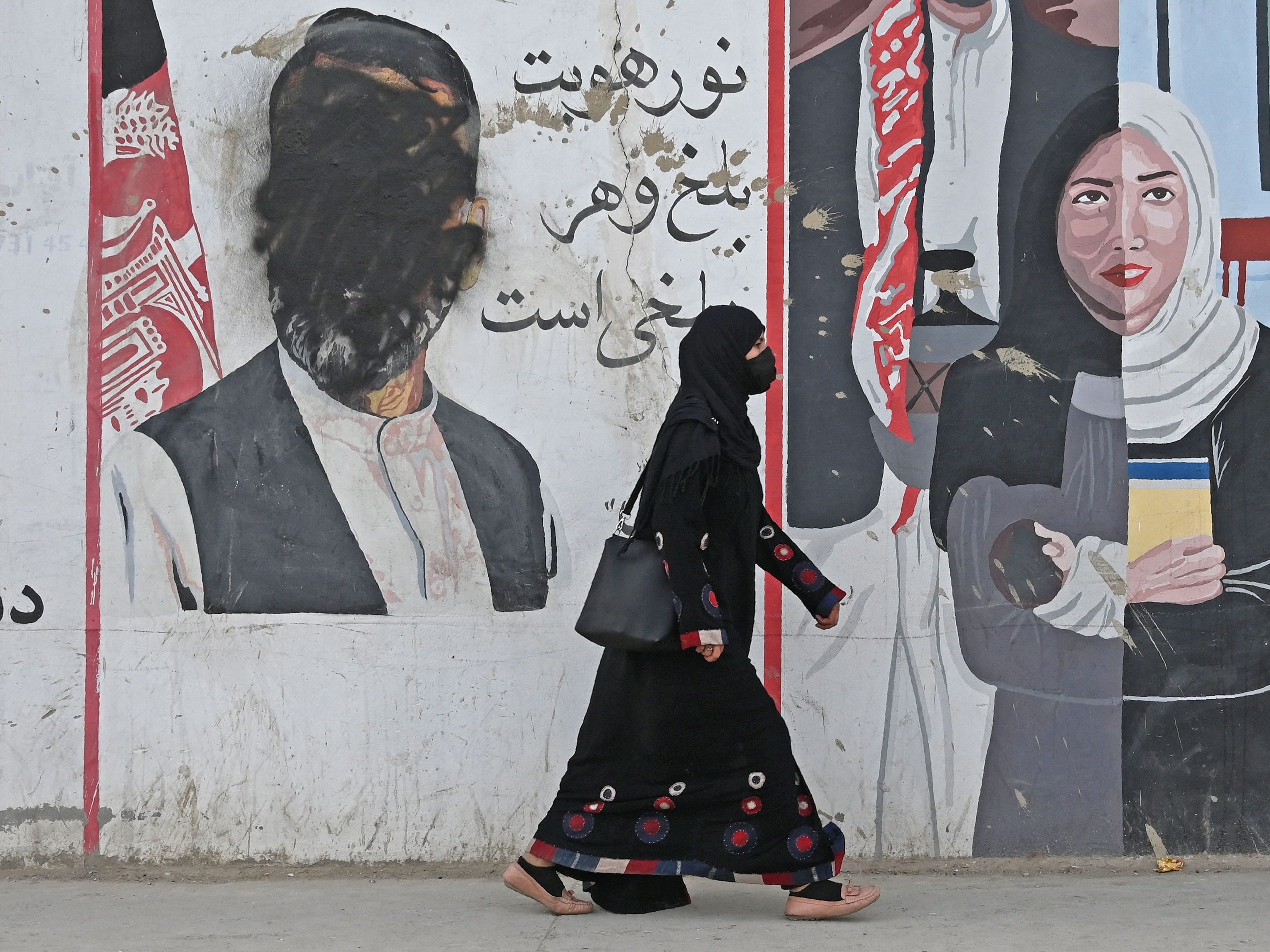 In early November, Frozan Safi, a well-known activist and economics teacher, and three other people were found dead in Mazar-e Sharif, one of Afghanistan’s largest cities. According to a report, Safi, who was 29, could have been tricked into thinking she was going to a safe house while waiting for her asylum application to be approved.

At about the same time, a message tagged “Important security alert” spread on WhatsApp among the city’s English speakers. It claimed that a “death squad” pretends to be a Western human rights and rescue organization “and, using English,” summons people in secret to meet and then execute them. ” The message linked this suspected team with the killings in Mazar.

The message was very likely a hoax, but it seemed to confirm people’s worst fears.

Regardless of the source, the warning text gave a sense of acute unrest in Mazar, which has served as one of the hubs for people wishing to leave the country since the Taliban took control of Afghanistan on 15 August. Several evacuation flights have departed from the city’s airport, bringing Afghan journalists, military interpreters and others from the capital, Kabul, and other provinces.

Journalists, lawyers, NGOs and security workers and English speakers say there is a sense that the danger can come from anywhere – mafia groups, a rogue Taliban fighter or an ordinary criminal who feels brave to act on personal resentment – and it is not clear where to turn for help.

“Mazar is a small place. It does not take much time for people to find out who you are, what you do,” said Qudsia Shojazada, a local activist and journalist who helped organize women’s protests in the first weeks after, that the Taliban took control in mid-August.

‘You worked with foreigners to split families’

The Taliban took control of Mazar, one of Afghanistan’s economic and cultural hubs, on 13 August. Two days later, Afghan President Ashraf Ghani fled the country, and two weeks later, the US military ended its withdrawal from Afghanistan and ended its 20-year war.

Since then, Zainab, a Mazar resident in her 20s, has been extra careful when going out on the town. Before leaving the house, she makes sure to put on her sunglasses, cover as much of her body as she can and wear minimal makeup – all to avoid being recognized.

Although many of the other women and girls who go out into the city dress pretty much as they used to before the Taliban took power, Zainab says the years she spent working with lawyers in family litigation make her a target. . (Insider uses a pseudonym.)

Zainab was among those who saw the frightening message. Regardless of its source, such things have increased her sense of discomfort.

“There are a lot of people with anger and resentment for us,” she said. “Eventually, they will find out that I have been working on cases involving domestic abuse and divorce. What if they say to me, ‘You were part of the problem, you worked with the foreigners to split families”.

Zainab says both men and women who had worked with legal, human rights and Western-funded agencies go to great lengths to remain “as anonymous as possible” in the city.

“I saw a female lawyer who had been working on divorce cases, you could see she was trying so hard to change her appearance,” Zainab said.

“People who were active in the community no longer feel safe and comfortable.”

In Mazar, as in other Afghan cities, there have been numerous reports of abuse and intimidation of journalists, protesters and professionals linked to US forces by Taliban infantry.

A former resident of Mazar, who has since moved to Canada and has spoken to Insider on condition of anonymity, has heard from relatives and friends that targeted killings in Mazar have increased over the past three weeks.

But with the country’s once so pulsating media largely shut down, it’s hard to know what’s really going on in the country, and such rumors are hard to confirm.

Local media have struggled under the Taliban’s intimidation and lack of funding, as they, like many Afghan institutions, were heavily dependent on financial support from the West. The country is also facing a cash squeeze as US and international bodies such as the World Bank and IMF blocked access to $ 9.5 billion ($ 13 billion) in assets and loans.

In a statement issued last month, the Afghan Journalists Safety Committee (AJSC) said 70 percent of the media across the country is closed. “Media reporting quality has reached its lowest level in the last 20 years,” it said.

The killing of Safi and the other three – they have still not been publicly identified – was the rare case that the Taliban confirmed, and with it came a wave of press attention.

In a video statement posted online, a spokesman for the Taliban’s Interior Ministry, Qari Saeed Khosti, said the victims had been “invited to the house” by the alleged killers. He did not name the assailants, but said they had been detained.

Zabihullah Noorani, head of the Taliban’s cultural commission in Balkh province, said in an interview that the killings were the result of a “personal issue” and had nothing to do with politics.

The Taliban’s supreme leader, Haibatullah Akhundzada, said in a statement last week that there may be “unknown” entities among their ranks who “work against the will of the government” and that these individuals will be punished.

On the streets of Mazar, the Taliban are much less visible compared to Kabul and Jalalabad, another major city. But their presence is felt.

Male store owners, students and taxi drivers in the city told Insider that they feel comfortable in the city and that petty crime has almost stopped in Mazar. But those involved in social and political affairs do not share the same sense of ease.

“The day after the Taliban took Mazar, we went to the office and handed over what was still in our possession,” said a former security officer at Mazar, who described himself as a desk worker who mostly sat “behind a computer.” and had little direct involvement in the operation.

His attempt to appease the group was of little use, although Taliban officials declared a general amnesty when they took over the country, he said he still receives calls from the Taliban saying he has not yet handed over weapons and vehicles that belongs to the government, a claim he rejects.

Patricia Gossman, Associate Director of Human Rights Watch, said the security worker’s case is in line with other reports she has heard from Helmand, Kandahar, Kunduz, Paktia, Nangarhar and Ghazni provinces. Gossman said HRW is still awaiting the Taliban’s response to the cases documented by the rights group.

Fearing abuse and retaliation, the 36-year-old has since left town and moved to his family home in a neighborhood more than 40 miles away. He says he feels robbed of everything he worked for.

“I went to college and took a degree, and now I just grow potatoes and onions in secret,” he said.

Too scared to say no

Immediately after the Taliban took power, women-led protests were held in Mazar and other major cities. But by September, they had largely stopped.

Shojazada, the local activist who helped organize the demonstrations in Mazar, said she has been in hiding ever since and has changed where she lives several times.

She said several co-activists have been detained just for their previous work, and she has received reports of targeted killings and disappearances in the city. The Taliban’s intelligence in Mazar is “very powerful,” she said.

Shojazada knows it himself from his own family experience.

Over the summer, one of Shojazada’s brothers joined the government – sponsored Uprising Movement to fight the Taliban’s rapid progress. He was detained shortly after the Taliban seized power despite the promised amnesty. While conveying the story, Shojazada is careful not to reveal too much for fear of inspiring further retaliation against their family.

Shortly afterwards, when one of her girlfriends was arrested and detained for 20 days after participating in a protest in September, Shojazada said the family resisted help to avoid making the Taliban angry.

“They did not want anyone to know that their son had been arrested,” Shojazada told Insider. “We had to work so hard to win their trust, just so we could try to help them where we could.”

“People in Mazar are afraid to speak out,” she said.