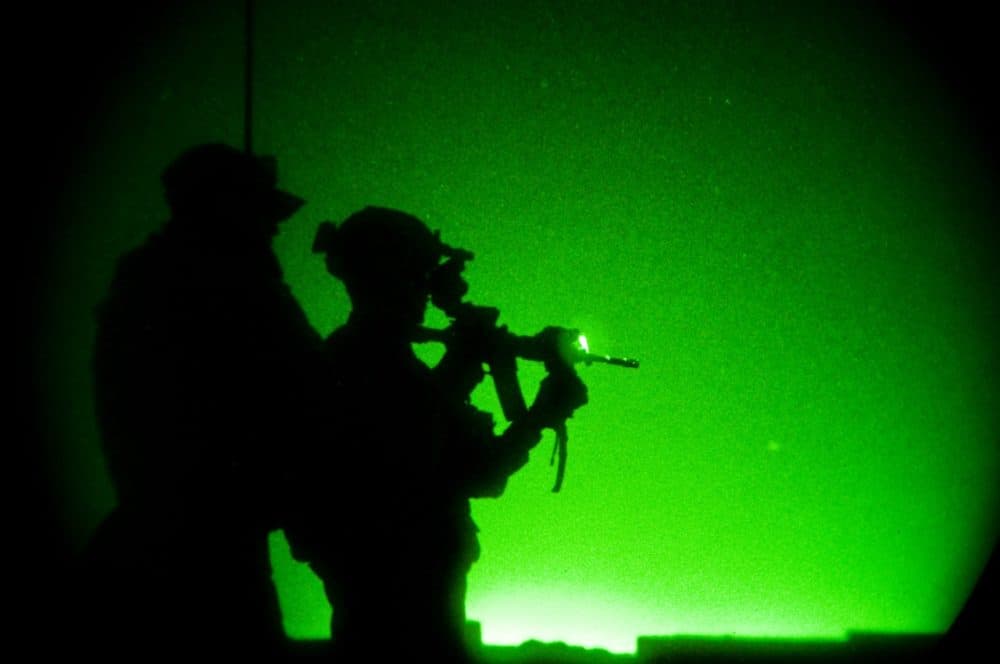 During the 20 years the United States waged war in Afghanistan, American troops trusted local citizens to be their eyes, ears, and protectors. Translators, also known as linguists, helped them communicate, navigate the country, and avoid danger.

When the United States quickly withdrew from the country in August, many of the Afghans who worked with the U.S. military were left behind.

The Taliban, which now controls the government, has marked them and their families for revenge and is actively hunting them down. That’s the scenario of an Afghan man we call Ahmad. WBUR has agreed not to use his real name or identify his family members to protect their safety.

Ahmad served as a translator for the U.S. military for three years. He immigrated to Georgia in 2015 but could not take his family with him. They are now hiding in Afghanistan.

“I was trying to serve my country … to bring peace to my country,” Ahmad said. “In the beginning, I did not know [the Taliban] would hurt my family. “

Ahmad is not the Taliban’s only target in his family. His brother served in the Afghan army and remains captured in Afghanistan. Taliban soldiers have beaten their other family members and kidnapped another of their brothers.

Ahmad tries to get them out of the country with the help of one of the American soldiers he served with, James Lockett. Lockett is now in his final year of law studies at Suffolk University in Boston.

Lockett and Ahmad spoke with WBUR’s All things Considered host Lisa Mullins about the terror Ahmad’s family faces every day and the frustrations the two face as they try to help them escape Afghanistan.

Highlights from this interview have been easily edited for clarity. It contains descriptions of violence.

About Ahmad’s role with the US military and the consequences

Lockett: [Ahmad] went out with us on patrols daily to serve as our intermediary between the local Afghans we were trying to talk to, whether it was civilians or the Afghan national defense forces.

But he also served as a set of eyes and ears … he lived at the base with us, he went out with us, he was in danger with us. He spent every day carrying out the same patrols that we were, but unarmed – so in fact, probably in more danger than we were. And precisely because of the work with us, he and his family were also in danger.

Ahmad: I grew up in Kabul and I go to my job in Kandahar – I thought Kandahar would be the only place the Taliban know me. I did not know that they would come to Kabul and they would find out information about my family.

But they find out the information. And my dad called me and he said ‘how are we going to live here, it’s too much risk for us.’ And then I say to my father … I have to serve my country and I have to risk my life. And he says, ‘We are all in danger now, what will you do to us?’

And Kabul was safe at the time … but now Kabul is not safe. Everyone is in danger out there.

About what has happened since the Taliban took over

Ahmad: On the second day in Kabul [collapsed], they attacked my house and they started beating everyone … they put them all in one room and they kept searching in every room. And then they [tortured] my family for a few hours.

So in front of my family, they shot one of my brothers. Then they took one of mine [other] brothers with [them]. I do not know where he is, he is still missing. The one they shot after the Taliban left my home, my father took him to the nearest hospital. He’s still alive, but he has a bad back injury.

After a few days they come to my house again and they ask my father, ‘Are you ready to bring your sons to me?’ He says, ‘I do not know where my sons are, they have disappeared, I do not know.’

And [the Taliban] says: ‘I give you one last chance, if you do not bring your two sons to me, I will take your daughter. We’ll kill you one by one, everyone. ‘

About the difficulty of getting Ahmad’s family out

There is no longer an embassy in Afghanistan. So it’s this catch 22 of how to get people out of Afghanistan if the Taliban do not let them out, and the last step is to get out to get that interview. So it’s complicated.

[United States Citizenship and Immigration Services], which is the agency in the Ministry of Foreign Affairs that processes these normally, sees about 2,000 applicants a year, and we know from [Ahmad’s attorney] that they probably already have up to 50,000 applicants. “

About the current situation

Lockett: We were able to move the whole family into a safe house. It is a place that is safe where family members hide from the Taliban. We have had various contacts to try to secure these places throughout the country.

Many of the houses themselves are made available by other members of the Afghan community who are sympathetic to a lot of people who are in danger.

… The situation on earth changes daily. We get reports that the Taliban are actively searching for people staying in the home. I think every day that passes is a level of discomfort for both of us because we know time is not on our side. In the end, the faster it goes, the better, but unfortunately there are thousands of families that are identical with Ahmads. So we play the long game.

Lockett and Ahmad are still looking for ways to get more than a dozen members of Ahmad’s family out of the country in safety; similar efforts have been made to get other high-profile Afghans out of the country, including a group of female judges. Meanwhile, the Ahmad family’s immigration applications are pending with the US government.